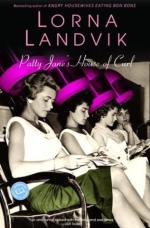 Lorna Landvik
This Study Guide consists of approximately 31 pages of chapter summaries, quotes, character analysis, themes, and more - everything you need to sharpen your knowledge of Patty Jane's House of Curl.

This detailed literature summary also contains Topics for Discussion and a Free Quiz on Patty Jane's House of Curl by Lorna Landvik.

Patty Jane Dobbin married the man of her dreams just a few years after having to take custody of her sister and provide a home after their parents died. On her wedding night to the beautiful Thor Rolvaag, Patty Jane becomes convinced that she has conceived their first child. No one believes Patty Jane, insisting she could not possibly know something like that. However, as the months pass, Patty Jane's condition becomes obvious. Thor is not happy with the idea of impending fatherhood. Thor becomes less affectionate with Patty Jane, pulling away the more obvious her pregnancy becomes. Finally, a few days before Patty Jane is due to deliver, Thor argues with her and leaves her alone in the supermarket. Thor never comes home.

At the same time, Harriet, Patty Jane's sister, meets and falls in love with Avel Ames III, the male heir to the popular Ames Grains, a cereal company. Avel is a small man, but he has a huge heart and he uses this heart to give Harriet everything her heart desires. This includes allowing Harriet to quit her job and begin taking music lessons. Avel's sister's do not approve of his impending wedding, so they send him off on a business trip through the spring and summer leading up to his wedding date. However, Avel insists on coming home in time to marry Harriet on their chosen date. On this day, Harriet is preparing to meet Avel at the airport when she learns that his plane has crashed.

Both Harriet and Patty Jane settle into a deep depression following their tragedies. However, Patty Jane needs Harriet, forcing Harriet to bury her feelings and ignore her own pain. Eventually Patty Jane receives a note from Thor informing her that he has left her voluntarily. Patty Jane is devastated, but eventually pulls herself together to provide for her infant daughter, Nora.

With Ione, her mother-in-law's help, Patty Jane becomes a hairstylist. Patty Jane opens a hair salon, the House of Curl, in the front room of a house she shares with her sister, Ione, and Nora. Everyone has a job at the hair salon, including Nora. Life seems happy until Harriet begins to drink. At first it was just for fun, but soon Harriet realizes that drinking makes the pain of losing Avel disappear. In time, Harriet's drinking becomes so bad that she begins missing work. Patty Jane throws Harriet out of the house and she ends up living on the street, or sharing hotel rooms with any guy willing to buy her a drink.

After a year on the street, Harriet meets Reese Brown, a beat cop with a history of alcoholism. Reese gives Harriet clothes, money, and the address of an AA meeting. After seeing Nora on a passing bus, Harriet goes to the meeting and vows to clean herself up. Reese helps Harriet and eventually returns her to her family. In time, Harriet and Reese get married and settle into a happy life. At the same time, Patty Jane has begun a relationship with her manicurist, Clyde Chuka. Shortly into this relationship, however, Thor is discovered to have been living with a local dentist. Thos was injured the night he disappeared and this dentist, a mentally deranged woman, has been hiding him in her house.

Thor moves back in with Patty Jane, who decides to care for him even as she continues her relationship with Clyde. Harriet begins suffering from exhaustion and believes she is pregnant. Unfortunately, it turns out Harriet has lung cancer. Harriet continues to work at the House of Curl during her illness, and dies there in her old bedroom with her family around her.

Life goes on at the House of Curl. Nora goes to college and becomes a lawyer. Patty Jane and Clyde have a son. Ione begins traveling with friends and eventually retires to Arizona. Nora comes home and opens a law practice out of Thor's house in Minneapolis.

More summaries and resources for teaching or studying Patty Jane's House of Curl.