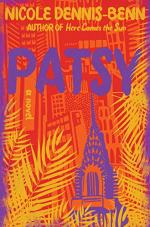 Nicole Dennis-Benn
This Study Guide consists of approximately 91 pages of chapter summaries, quotes, character analysis, themes, and more - everything you need to sharpen your knowledge of Patsy.

This detailed literature summary also contains Quotes and a Free Quiz on Patsy by Nicole Dennis-Benn.

The following version of this book was used to create the guide: Dennis-Benn, Nicole. Patsy. Liveright Publishing Company, 2019.

Dennis-Benn's novel is divided into 56 chapters among six books. Patsy, a single mother living in Jamaica, is the novel's main character and who the novel mainly revolves around.

The novel begins with Patsy leaving her house early in the morning to go the American embassy in Kingston for an appointment to obtain a visa. Patsy is a discontented, intelligent, single mother living in the poverty-stricken neighborhood of Pennyfield with her daughter, Tru, and her zealot mother, Mama G. Patsy applies for a visa to America to go be with her childhood best friend and lover, Cicely, who has been living there for years having gotten a green card through her marriage to an American. Patsy has the understanding that Cicely's marriage is just for the visa, and that when Patsy arrives, she and Cicely will be able to be together as a couple, something she has dreamed about for years. Patsy receives the visa, and makes the difficult decision to leave Tru behind with Tru's father, Roy. After Patsy leaves, the rest of the novel moves back and forth between Patsy and Tru, following how their lives progress separate from each other.

In America, Patsy's life is completely different than what she expected. Cicely's marriage is not fake, and it is soon revealed that Cicely and her husband have a son together. After staying with them for several weeks, Patsy is forced out of the house because of Cicely's husband's temper and jealousy. On her own, Patsy navigates New York looking for ways to make a living, and ultimately, to send money back to Tru. She constantly negotiates the intense pressures that undocumented immigrants face in trying to simply survive in America. Not only are her romantic dreams crushed, but her aspirations for realizing her own potential are as well. She suffers from constant guilt and insecurity about herself as a person, as a professional, as a lesbian, but most of all as a mother. She thinks about Tru constantly throughout the years, but the guilt overwhelms her and she has little to no contact with her daughter.

Back in Jamaica, Tru moves in with her father, Roy, his wife, Marva, and their three sons. It is a major shift for Tru in many ways, and she is resistant to the change and adaptation to her new family because she has the expectation that Patsy is going to be back for her soon. As Tru grows up, she struggles with her sense of identity in many ways. She longs for Patsy's presence in her life as she always feels outside of Roy's family. Additionally, she struggles with coming to terms with both her sexuality and her gender identity. She spends much of her time playing soccer with boys, and rejects many of the ways she is expected to express her femininity. She is jealous of the boys she grows up with because of their anatomy, and feels uncomfortable as she begins to develop breasts and gets her period. Towards the end of the novel, Tru starts to discover and express her attraction to women as well.

Patsy explores many different jobs in America, and ends up becoming a nanny for a number of different children, an ironic fate given the guilt that lives with her about not being there to mother Tru. As the novel progresses, more and more trauma is revealed about Patsy's childhood and adolescence, particularly in her sexual history. She suffered sexual assault at least twice as a child, including with a father figure in her life. This sexual history follows her as she seeks a kind of validation in being promiscuous in her adolescence, and then in the anonymous sex that she has in America. It is only in the intimate moments that she shares with women that Patsy feels most comfortable in her body and with who she is. She thinks of Cicely throughout the years, but ends up falling in love with another woman, Claudette, another Jamaican who pushes Patsy to think about herself and her own dreams, and to have the courage to pursue them. It is with Claudette's encouragement that Patsy finally reaches out to Tru.

In the last part of the novel, Patsy sends Tru a barrel of gifts that she has been collecting for her over months and maybe even years. The barrel is filled with items that a "typical" 16-year-old girl would like, including make-up and barrettes. Patsy sends the barrel without having any sense of Tru's identity and the person she has become as she has grown up. The barrel arrives at a particular moment when Tru is feeling the worst about her conflicted identity as a girl who wants to be a boy, who wants to play on the boys' soccer team, but who is constantly being degraded and negated for her lack of femininity by society at large as well as by members of her own family. The arrival of the barrel cuts Tru deeply on multiple levels, and she attempts suicide.

While the suicide attempt is tragic, it ultimately leads to an opening up of space for Tru to more comfortably express herself as well as for she and Patsy to start developing a relationship. As the novel ends, Tru is a star soccer player at her school. She is dating a young woman, and she and Patsy talk regularly with plans for a visit in the future.

More summaries and resources for teaching or studying Patsy.