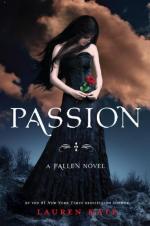 Lauren Kate
This Study Guide consists of approximately 41 pages of chapter summaries, quotes, character analysis, themes, and more - everything you need to sharpen your knowledge of Passion.

Passion is the third novel in a four-novel series surrounding fallen angels from Heaven and their battle to choose between the forces of Heaven and Hell. At the center of this choice is Luce, a human, and her lover, Daniel, a fallen angel. When Daniel fell from Heaven, he was cursed to never be with his love, Luce. In this novel, Luce travels back through time, visiting her various past lives, in the hopes of finding out what kills her every seventeen years, and how she can break the cycle so she and Daniel can be together forever.

At the opening of the novel, Luce is running blindly through time, using Announcers as portals to her past lives. Luce is cursed to die every seventeen years and be reincarnated, but she has no idea what causes her continual deaths. All Luce knows is that with every death, she is separated from her lover, Daniel, who follows her through eternity, falling in love with her again and again, in every lifetime. As Luce sprints blindly through time, she meets a small gargoyle named Bill who claims to have all the answers Luce needs, if she will let him travel with her. Although Luce is skeptical, she decides to partner with Bill in the hopes that he will speed her quest along. Meanwhile, Daniel is also traveling through time trying to find Luce. He knows that what Luce is doing is extremely dangerous. If she makes one false move, she could alter history forever, potentially killing herself for good. But Daniel is not the only one in search of Luce; many of the other fallen angels, and Cam, a demon, race through time trying to track her down. Although their motives aren't entirely clear, it is understood that if they find Luce before Daniel does, it could have grave consequences. Luce's friends from school, Shelby and Miles, are also attempting to locate Luce but being Nephilim - the offspring of fallen angels and humans - their time traveling skills are clumsy at best, creating extremely dangerous situations for all history.

Throughout the novel, Luce travels to various times in her history, ranging from Moscow, 1941 to the literal beginning of history at Heaven's Gate, moments before the angels' fall. In each of these short visits, Luce struggles to discover the meaning behind her deaths and the truth of her love for Daniel. Luce goes through many different transitions, first feeling that Daniel is attracted to her simply because of the curse, not because he actually loves her. From there, Luce learns that in every reincarnation, her soul is automatically drawn to Daniel's and Daniel could have taken advantage of that seemingly mindless admiration. Instead, in each life, Daniel wins Luce over. He makes sacrifices to earn her love again and again. In this, Luce learns that Daniel loves her more deeply than she ever imagined. In her attempt to understand why she continues to die again and again, Luce learns from Bill how to "go 3-D" cleaving her current soul to her past souls, allowing Luce to enter the bodies of her past selves and experience her histories as if they are occurring in the present moment. Through this, Luce sees a montage of images of Daniel's face whenever she dies. Luce believes that Daniel is terrified not of what is happening to Luce, but of Luce herself. Through Bill's guidance, Luce makes the decision to kill her eternal soul - the soul cursed to be reincarnate forever - thus setting herself, and Daniel, free from their oppressive love forever. Once the curse is broken, Luce and Daniel will cease to exist. Their souls will no longer be drawn together and they will be strangers to each other. Although it breaks her heart, Luce believes that this is the only way to truly set Daniel free.

Bill is inexplicably gleeful at the thought of Luce killing her soul, and makes all the necessary arrangements for Luce's decision. When the moment arrives, however, Luce is unable to free her soul, claiming that she could never separate herself from Daniel and that there must be another way to break the curse. When he hears this, Bill is furious. He transforms from being a sweet gray gargoyle to evil incarnate. Throughout their entire journey, Bill - who is really Satan - has been deceiving Luce in the hopes of breaking Daniel's heart, sending him to the Dark Side. When Lucifer stepped away from Heaven, all the angels were forced to choose a side: Heaven or Hell. A handful of angels - including Daniel, Cam, and many of Luce's school friends - chose not to take a side, and were forced out of Heaven, becoming fallen angels. Since then, both Heaven and Hell have been trying to convince the angels to choose one side or the other, thus altering the power of good and evil in the world. Satan needs one more angel to gain more power than Heaven, and he hoped Daniel would be that soul. Now, he must hatch a new plan to win over Daniel's soul, a plan that will be executed in the fourth and final book of the series. At the end of the novel, Luce and Daniel are reunited with the rest of the fallen angels, and prepare to battle Satan for their eternal souls, in the hopes of saving the world and breaking the curse between Luce and Daniel once and for all.

More summaries and resources for teaching or studying Passion.