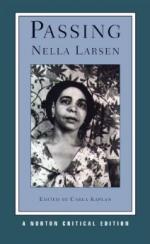 In chapter 3, Irene is shopping with a black friend, Mrs. Felise Freeland, when they turn a corner and run into John Bellew. Mr. Bellew recognizes Irene and attempts to greet her, but Irene turns away without acknowledging him. Belatedly, Irene realizes she could have used this opportunity to tell Mr. Bellew about his wife's racial heritage or at least her frequent visits to Harlem, but she does not.

In chapter 4, Irene does not tell either Brian or Clare about her chance meeting with Mr. Bellew. Irene wonders what Mr. Bellew will do to Clare, but when she calls to say she will be attending Mrs. Freeland's party the following evening, Irene believes that Mr. Bellew did not understand what he saw when he ran into Irene and Mrs. Freeland.

Clare comes to the Redfield home as Irene...