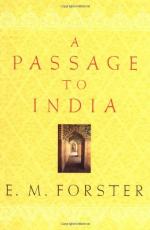 E. M. Forster Writing Styles in A Passage to India

The novel is set in the cities of Chandrapore and Mau, India, in the 1920s. The setting of this novel is important because the time period is during the colonial period in which India is ruled by Great Britain. The main characters of the novel are intermixed between native Indians and British Anglo-Indians.