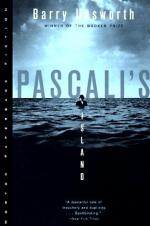 Barry Unsworth
This Study Guide consists of approximately 57 pages of chapter summaries, quotes, character analysis, themes, and more - everything you need to sharpen your knowledge of Pascali's Island.

This detailed literature summary also contains Topics for Discussion and a Free Quiz on Pascali's Island by Barry Unsworth.

Pascali's Island is written as a letter to the Excellency of Constantinople in 1908 by Basil Pascali, a paid informant on a small Greek island. Pascali has reported to the Ministry on the activities of those on the island for nearly twenty years, but as of late, has begun to believe his neighbors suspect his activities. When Pascali meets self-proclaimed archeologist Anthony Bowles, an Englishman new to the area, and as Bowles begins to win over the heart of Pascali's unrequited love interest, Lydia Neuman, Pascali finds himself tracking Bowles' movements in an effort to discover his true intentions. It is only when Pascali discovers Bowles' true nature as a liar who deceives many for monetary gain that he begins to contemplate betraying Bowles. After learning of Bowles' plan to remove a priceless artifact from the property of Pasha, the local governor, Pascali begins working with authorities to bring about the demise of Bowles. In the end however, it is not only Bowles who falls to failure, but when Lydia dies, Pascali too suffers from the double agent role he himself has played. Filled with intrigue, espionage, and schemes, Pascali's Island is a timeless tale of love, treachery, and morality in the declining days of the Ottoman Empire.

Basil Pascali is a paid informant in 1908 for the Ottoman Empire, who resides on a small Greek island ripe with political intrigue and a wide variety of cultural influence. Pascali, a resident of the island for nearly twenty years, has become bored with his life as a spy, and has begun peppering his reports to the Sultan with characters and events of fiction. Recently, however, Pascali has become certain that the islanders know of his activities, and is filled with a sense of paranoia and a certainty of his impending death.

When Anthony Bowles, an English archeologist, arrives on the island, Pascali feels an immediate kinship with the man, but also distrusts him, particularly after finding several artifacts hidden in Bowles' hotel room, including a revolver. Bowles requests Pascali's services as a linguist to assist him in arranging a lease for local ruins from the corrupt leader of the island, Pasha, and his assistant Izzet. As Pascali assists Bowles, he becomes more certain Bowles is not what he appears to be, and as Bowles steals the heart of the woman Pascali loves, Lydia, Pascali's mistrust rapidly deteriorates into betrayal. When combined with local characters of intrigue including a German commercial agent, Gesing, and an American fisherman, Smith, Pascali's life becomes far more interesting than he bargained for.

When Pascali is convinced that Bowles is deceiving him, as well as deceiving Pasha and Izzet, he himself plays a role of duality, blackmailing the Englishman to keep his secret. However, with the discovery of a bronze status at the ruin site and with Bowles' insistence that the Ottoman Empire, Pascali's only light of hope, has fallen, Pascali betrays Bowles. By bringing in the multiple forces at work on the island, Pascali seeks to ensure the failure of Bowles and of his scheme. In the end, however, Pascali also loses as Pasha's army shoots and kills Bowles and Lydia as well as four other men.

This novel, filled with political strife, social commentary, and a vast historical presence, tells the tale of five individuals whose greed, duality, violence, political stance, and deceit result in their own demise. Further, through Pascali's vivid descriptions and through Bowles and Gesing's discussions, the novel tells of the downfall of a vast Empire and its society, and the dangers of deceit.

More summaries and resources for teaching or studying Pascali's Island.