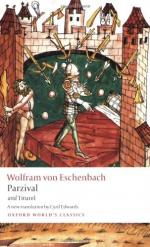 Wolfram von Eschenbach
This Study Guide consists of approximately 45 pages of chapter summaries, quotes, character analysis, themes, and more - everything you need to sharpen your knowledge of Parzival.

This detailed literature summary also contains Topics for Discussion and a Free Quiz on Parzival by Wolfram von Eschenbach.

Parzival by Wolfram von Eschenbach is the reworking and completion of Chretien de Troyes' tale of Perceval and the Holy Grail. Wanting to become a knight, Parzival leaves home and seeks adventure, gaining renown for his exploits, but after he fails to ask the Question of Anfortas, he begins his search for the Gral, which leads to many sorrows and misfortunes. "Parzival" is one of the first tales in Arthurian legend that introduces the legend of the Holy Grail, and the story is very entertaining and exciting.

After leaving his homeland following his father's death, Gahmuret rescues Queen Belacane of Zazamanc from her enemies and marries her, but he abandons her to seek adventure when she is pregnant with their son, Feirefiz. Gahmuret wins a tournament in Waleis and marries Queen Herzeloyde; however, he is killed while fighting for the Baruc in Baghdad, leaving Herzeloyde alone to raise their son Parzival, which she does in the woods in order to prevent him from obtaining knowledge of knights. After encountering knights, Parzival decides to become a knight and leaves, and his mother dies of grief as he departs. On his journey, Parzival steals Lady Jeschute's ring, causing Orilus, her husband, to punish her for being unfaithful. At King Arthur's court, Lady Cunneware laughs when she sees Parzival and, as this indicates that Parzival is destined to win, Keie beats her, causing Parzival to swear that he will avenge her. After killing Ither and obtaining his red armor, Parzival leaves King Arthur's court and is trained by Gurnemanz, an old knight, in the ways of knighthood and chivalry.

When Parzival travels to the city of Belrepeire, he frees Queen Condwiramurs from the armies of King Clamide and marries her, but he soon leaves to seek adventure and renown. Parzival finds lodging at Munsalvaesche one night, where he sees the mysteries surrounding the Gral, but he fails to free Anfortas by asking the Question; when he leaves the next day, he encounters Sigune, who chides him for failing to ask the Question. Next, Parzival encounters Jeschute and jousts with Orilus, after which he professes Jeschute's fidelity to her husband. When Segramors and Keie challenge Parzival without recognizing him, he unhorses each of them. Aterwards, Gawan invites Parzival to King Arthur's court, where he is made a Companion of the Round Table; unfortunately, the celebrations are cut short when Cundrie arrives to chide Parzival for failing to ask the Question of Anfortas, causing him to leave, swearing to find the Gral. Then, Kingrimursel arrives to challenge Gawan to judicial combat in Schanpfanzun for the charge of killing his lord, and Gawan leaves King Arthur's court to accept the challenge. Gawan's duel is postponed after King Vergulaht breaches the codes of hospitality by offering violence where safe passage was promised. Meanwhile, Parzival spends some time with Trevrizent the hermit, learning about God, sin and the Gral.

After being cleared of the murder charge, Gawan meets Duchess Orgeluse de Logroys, who scorns and mocks him, even after he succeeds at the adventure at Schastel marveille, freeing the ladies within. When Gawan picks a garland from a tree in Orgeluse's service, King Gramoflanz challenges him to a duel. Gawan sends for King Arthur, who arrives shortly thereafter, and Gawan sneaks out to duel with Gramoflanz, but the knight he battles is actually Parzival, who surrenders when he realizes he is fighting Gawan. King Arthur resolves the conflict between Gramoflanz and Gawan, allowing Gramoflanz to marry Itonje, his beloved and Gawan's sister, and Gawan marries Orgeluse. Missing his wife, Parzival leaves and fights an unknown knight who finally reveals himself to be Feirefiz, Parzival's half-brother. They celebrate at Schastel marveille until Cundrie arrives to announce that Parzival has been chosen to become the Gral King. Feirefiz accompanies Parzival to Munsalvaesche, where Parzival frees Anfortas from his suffering by asking the Question. Parzival is reunited with Condwiramurs and their twin sons, while Feirefiz converts to Christianity in order to marry Repanse de Schoye.

More summaries and resources for teaching or studying Parzival.