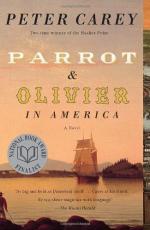 Peter Carey
This Study Guide consists of approximately 55 pages of chapter summaries, quotes, character analysis, themes, and more - everything you need to sharpen your knowledge of Parrot and Olivier in America.

Parrot and Olivier in America Summary & Study Guide includes comprehensive information and analysis to help you understand the book. This study guide contains the following sections:

This detailed literature summary also contains Topics for Discussion on Parrot and Olivier in America by Peter Carey.

"Parrot & Olivier in America" by Peter Carey is an intriguing novel about a French nobleman and his English servant immigrating to America. Due to the political discontent in France, Olivier goes to America to study the penal system in the new country, accompanied by his secretaire, Parrot. Both men find the opportunity for new lives overseas, but changing who he is proves to be more difficult for Olivier. "Parrot & Olivier in America" is an entertaining novel that explores the challenges that different social classes face in America.

Olivier is born into a family of French nobles who are tormented by the recent events of the French Revolution. Parrot lives in England with his father who works for a printer and Parrot tends to Watkins, an engraver and forger. When the printery is burned down and the printers are arrested, Parrot escapes. As an adult, Olivier attends democratic lectures with his best friend, Blacqueville, until Tilbot, Olivier's mother's friend, tells him that he is suspected of being a traitor and a spy and recommends that Olivier move to America. Tilbot also asks Parrot to accompany Olivier to America as the noble's secretaire, but Parrot's lover, Mathilde, is furious and sends him away, despite his intention to take her with him.

On the Havre, the ship to America, Olivier mourns the death of Blacqueville while Parrot laments the fact that Mathilde will not speak to him, though Tilbot bribed the captain to convey Mathilde and her mother to America with Parrot. On the ship, Olivier is befriended by Mr. Peek, a rich American banker, and when he agrees to sit for Mathilde to paint a portrait of him, Parrot's jealousy causes him to hate his new employer. In America, Olivier learns he cannot act against Parrot since the Comtesse de Garmont, his mother, assigned Parrot as his cosignatory, so without Parrot, Olivier cannot acquire any of his money. Parrot and Mathilde reconcile and Parrot quits his job. When Parrot is imprisoned after Olivier shoots a man, Olivier bails his servant out of jail as Parrot recalls meeting Tilbot on the moors after his father was arrested. Parrot was then taken on a ship to Australia, and Tilbot abandoned him during the journey.

After Parrot returns to Olivier's employment, they visit Mr. Peek's farm where Olivier meets and falls in love with Amelia Godefroy. Olivier and Parrot tour the Quakers' prison in Philadelphia and while visiting M. Duponceau's library, Parrot finds a book with one of his engravings. He then tells Olivier about his past and how he got involved with Tilbot who returned to look for him in Australia and convinced Parrot to leave his wife and child in order to become an artist in Paris. Olivier sends Parrot to New York to buy a French copy of Moliere's "Tartuffe" and Parrot finds Mathilde and her mother absent from the boardinghouse where he left them.

Parrot and Olivier travel to Wethersfield, CT to visit the Godefroy family and tour Wethersfield prison, and on the way, they become friends. As Olivier falls deeper in love with Miss Godefroy, he sends Parrot to New York for an extended vacation, allowing Amelia to act as his secretaire in his servant's absence. In New York, Parrot finds Mathilde living with Eckerd and a group which includes Watkins, and as Olivier summons his servant back to Wethersfield, Parrot learns that his friends are burning homes in order to fraudulently obtain insurance money. Upon his return to Wethersfield, Parrot becomes involved with the town printer until he informs Olivier that he is leaving to pursue his own career plans.

Olivier's grief at losing Parrot is short-lived because Amelia agrees that he may ask her father's permission to marry her, and she arranges a trip for Olivier and Mr. Godefroy during which the Frenchman obtains permission to marry his beloved. Meanwhile, Parrot writes to Tilbot with a business proposal regarding selling books that he will print in Europe. Though Olivier is disgusted by the Independence Day celebrations he witnesses, he is still willing to stay in America because he loves Amelia. However, when she insists on marrying in France and Mr. Godefroy agrees, Olivier tells his future father-in-law that his family will not accept Amelia. She overhears the conversation and refuses to marry Olivier.

In New York, Parrot has bought a house and set up a printery. Olivier visits and is distraught at the loss of Amelia. Although he is offensive, Parrot treats him kindly because he knows his noble friend is disappointed in his hopes for love. Olivier wants Parrot to return to France with him, but Parrot refuses because Mathilde is pregnant. Olivier leaves alone and dejected. Parrot dedicates his history of their stories to Olivier, claiming that Olivier's fears about America are disproved by Parrot's life.

More summaries and resources for teaching or studying Parrot and Olivier in America.

Parrot and Olivier in America from BookRags. (c)2022 BookRags, Inc. All rights reserved.