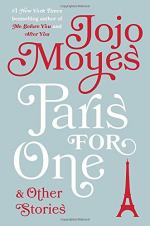 Paris For One Summary & Study Guide

Jojo Moyes
This Study Guide consists of approximately 39 pages of chapter summaries, quotes, character analysis, themes, and more - everything you need to sharpen your knowledge of Paris For One.

Paris For One Summary & Study Guide includes comprehensive information and analysis to help you understand the book. This study guide contains the following sections:

This detailed literature summary also contains Quotes and a Free Quiz on Paris For One by Jojo Moyes.

The following version of this book was used to create this study guide: Moyes, Jojo. Paris For One. Viking (an imprint of Random House LLC), 2016.

Nell, a 26-year-old single woman finds herself abandoned by her boyfriend in Paris one day. At the Hotel where she has booked a room she discovers that the room she has reserved has been double booked and winds up sharing the room with an American woman. Because Nell is an insecure woman, she feels timid about staying in Paris and considers going back home, but she decides to stay when she finds two tickets to an art show, left behind by an American woman.

At the art show, Nell has a second encounter with Fabien, a waiter and struggling writer upon whom she had spilled her wine the night before. Depressed over a recent break-up and the loss of half his novel, which had been blown into the streets of Paris the day before, Fabien finds himself drawn to Nell when he spots her crying near one of the paintings in the exhibit. He asks her out for coffee, and she accepts. Here, the two connect emotionally and intellectually, and Fabien asks Nell to go out that night to a bar where he is meeting up with a few friends. Nell accepts.

Before going out, Nell goes to a nearby shop and buys a new outfit because she wants to feel “Parisian.” While at the shop, she sees a green dress that she finds enchanting, but she cannot afford to buy it. When Fabien picks up Nell he takes her on a whirlwind tour of Paris on the back of his moped, and later they go from bar to bar, drinking and dancing. They spend the entire night together, and they eventually take a trip on the Seine in Fabien’s father’s boat, the Rose de Paris. Fabian tells Nell that is father’s business is suffering, and Nell suggests a new business plan for the boat, one geared towards providing romantic, customized tours. In the morning, Fabien tries to give Nell a kiss but the two are interrupted by the doorman of Nell’s hotel. Fabian asks Nell to dinner.

In the meantime, Nell’s friends back in England have discovered that Nell’s boyfriend, Peter, did not go on the trip because he wanted to go out drinking with his friends. They force Peter onto a plane to Paris.

Nell spends the day walking the streets of Paris with no particular plan, which is very unusual, as she is usually very strict about creating an agenda and sticking to it. Before returning to the hotel she buys the green dress. Fabien comes to pick her up, and they start walking to a courtyard where Fabien has waiting for them a private meal with one of his friends dressed like a waiter. On the way, however, Nell received the phone call that Peter is at the hotel. She excuses herself, and Fabien guesses that she has a boyfriend.

Back at the hotel, Nell meets up with Peter, who is dressed sloppily and is reluctant to take Nell out to dinner, stating that he would prefer to have a nap and room service. Nell is handed a note by the concierge that explains that Peter had been forced onto the plane by Nell’s friends. Upon reading this, Nell leaves Peter.

Nell catches up with Fabien at a bar and the two reunite and have a wonderful time. At the end of the night, they go to Fabien’s apartment, where Fabien reads some pages from a journal Nell has brought along, and Nell reads pages of Fabian’s novel. Fabien tells Nell about a new novel idea he has, which has a main character very similar to Nell. Nell likes his idea. They kiss, and Nell spends the night. In the morning Fabien walks Nell home and they part without a plan to meet up again.

Six months later, Nell receives a promotion at her job. She is unenthusiastic about it, and later that day when she is giving a presentation to individuals interested in finding employment in her company she ends the presentation by telling them how dull corporate existence is. Nell leaves the room, goes to the computer, and looks up Fabien’s father’s boat. She discovers that Fabien’s father had used her idea and that the boat has grown very popular. Nell calls her mother on the phone and tells her to meet Nell at the travel agency.

Nell goes to Paris and boards Fabien’s father’s boat, but Fabien is not there. Nell tells Fabien’s father how she had fallen for Fabien, and Fabien’s father calls Fabien. While circling the city, they find Fabien waiting on one of Seine’s bridges, and he jumps into the boat. He tells Nell that he has a publisher for his new novel. Nell asks him how it ends and he tells her he let the characters decide. The book ends with Nell telling Fabien how much she always liked happy endings.

More summaries and resources for teaching or studying Paris For One.

Paris For One from BookRags. (c)2022 BookRags, Inc. All rights reserved.