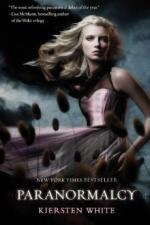 Plot Summary
+Chapters Summary and Analysis
'Oh Bite Me' to 'Not-Me and I'
'Lend Me Your Ears... Among Other Things' to 'Dead Meat in any Language'
'There's No Place Like Home' to 'Dumbbells, Boys, and Other Dense Things'
'Therapy Bills' to 'Poetry and Holding Hands'
'Light My Fire' to 'Hagtastic'
'Lost Souls' to 'Don't Call Me'
'Hearts Aglow' to 'Not Okay'
'What's in a Name' to 'My First Sleepover'
'Girl Talk' to 'Runs in the Family'
'One of a Kind' to 'Girls, Crying, Wolves'
'Hey, Stupid' to 'Liar, Liar, Wrist on Fire'
'So Alone Together' to 'Don't Muss the Make-up'
'Party Crasher' to 'Heaven, Hell, And That Little Place Between'
Free Quiz
Characters
Objects/Places
Themes
Style
Quotes
Topics for Discussion
Order our Paranormalcy Study Guide

Kiersten White
This Study Guide consists of approximately 76 pages of chapter summaries, quotes, character analysis, themes, and more - everything you need to sharpen your knowledge of Paranormalcy.

This detailed literature summary also contains Topics for Discussion and a Free Quiz on Paranormalcy by Kiersten White.

Paranormalcy is the story of Evie, a teenage girl who tracks and tags supernatural creatures for an international agency, IPCA. She falls in love with a paranormal boy called Lend, and they escape together when a mysterious killer attacks the center. Evie finds out that she is an Empty One, made by the faeries, who is meant to steal souls to keep herself alive. Evie refuses to be a murderer, and faces up to the killer, who is her sister Vivian. She takes all the souls she has stolen and releases them. She discovers that she does have a soul of her own after all and looks forward to a happy life with Lend.

Evie is a teenage agent for IPCA, a paranormal hunting agency. She has a special talent; she can see through the glamours that paranormals put up to disguise themselves. This makes her an important asset to IPCA. One day a boy made of some kind of fluid material who can take on the appearance of anyone else breaks into the center. Evie stops him and he is imprisoned in a cell. Evie visits him regularly and begins to fall for him. She then finds out that she is a paranormal herself, and is shocked by the revelation. She begins to feel more sympathy for paranormals and sees the IPCA are not necessarily the good guys they seemed to be. Meanwhile, Lend tells her a prophecy about someone who is killing paranormals. The prophecy seems to relate to her, but Evie is not a killer.

Evie is constantly bothered by an obsessed faerie called Reth who keeps trying to push liquid flames inside her. She thinks he is trying to take her heart. One day Reth tries to take her while she is in Lend's cell, and Lend risks himself to save her. Evie tries to persuade the head of the center, Raquel, to be more lenient with Lend, but she will not listen.

As the threat of the killer intensifies, Raquel takes the center into lockdown, confining all the paranormal creatures in the center for safety. The killer attacks the center and Raquel escapes. Evie stays behind to help the trapped paranormals, instructing a faerie to save them. She then races to Lend's cell to save him, and Evie orders Reth to take them to Lend's house. Reth threatens Lend, forcing Evie to order him to change his name. He can now no longer be controlled.

Evie moves in with Lend and his father and begins to enjoy living a normal life. She visits Lend's high school, and he even asks her to go to his prom with him. However, Evie keeps having dreams about the killer, who is a girl called Vivian. She claims that she is Evie's sister and that the faeries created them both. She tells Evie that they need to steal souls from paranormals in order to live. At first Evie thinks these are just dreams, but Vivian sends her a message on her communicator and she realizes that they are real. Vivian tells her that Lend is immortal and that she will have to be a killer if she wants to be immortal and live forever with him.

At the prom, Reth captures Evie again and tries to force more of his soul inside her. She calls another faerie to help her escape, but is taken straight to Vivian. Vivian wants to be family with Evie and kill paranormals together, but Evie refuses to be a murderer. Instead, she turns on Vivian, taking all the souls that Vivian had stolen. Evie now experiences immortality, and attempts to steal Lend's soul. As she touches it, however, she is reminded of who she is and stops. She decides that she needs to release the trapped souls rather than use them to be immortal, rejecting her own desires in order to do the right thing. She releases the souls and falls to the ground.

She wakes up in hospital. The souls are now free and Vivian has been stopped. Reth is angry with her because he says she was supposed to release the faeries, not the souls. Evie does not care however, as she has helped the souls to gain release and is now free to live a happy life with Lend.

More summaries and resources for teaching or studying Paranormalcy.