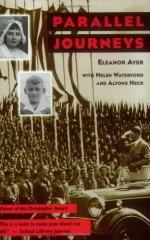 Eleanor H. Ayer
This Study Guide consists of approximately 53 pages of chapter summaries, quotes, character analysis, themes, and more - everything you need to sharpen your knowledge of Parallel Journeys.

Parallel Journeys is a true story about two people who live during the time of Nazi terror in World War II. The story is told by the author, Eleanor H. Ayer, with material written by Helen Waterford, a young Jewish woman, and Alfons Heck, a young German man, inserted throughout.

Helen had grown up as a Jewish girl in Frankfurt, Germany, in the early 1900s and married a strict Jewish man, Siegfried Wohlfarth, in 1933. Adolf Hitler was rising to power during this time and life became very difficult for Jews so Helen and Siegfried fled to Amsterdam, Holland, and lived a relatively normal life, even having a daughter named Doris in 1937. The Nazis began taking Jewish people in Germany and surrounding countries from their homes and sending them to concentration camps. Eventually the Nazis came to Holland looking for Jews. Fortunately, Helen and Siegfried were able to find a home for Doris with another family to spare her the terror of the camp. Helen and Siegfried were sent to a concentration camp but were soon parted and Helen never saw Siegfried again.

During this same time, Alfons, who was a young boy, was inducted into Hitler Youth, the organization that trained young men and women to fight for Germany. Alfons was drawn into the zeal and indoctrination promising everyone a new and better Germany. Alfons quickly excelled and ultimately became a glider pilot and then a high-ranking officer commanding more than 6,000 young soldiers.

While Alfons rose to personal power, Helen was enduring hell on earth at the Birkenau concentration camp and then at the Kratzau work camp for women in Czechoslovakia. The women in the camp were assured that they were to work, that this was not a death camp and that provided some relief from the terrors Helen experienced at Birkenau. By the time the Russians freed the prisoners at Kratzau, Helen was very weak and sick but the war was over and this was a huge joy.

Alfons returned to his village to find it and his home destroyed. He was then arrested by American soldiers and eventually released. Alfons suffered a crisis of conscience over the atrocities committed by the Nazis during the war and attended the Nuremberg Trials to see some of the officers tried for their crimes. A few years after the war, Alfons left for Canada and eventually moved to the United States.

After the war ended, Helen made the arduous journey back to Amsterdam and soon found her daughter. Friends found meager accommodations for them and Siegfried’s former boss paid her half his salary. Eventually, Helen and her daughter left for the United States to join her parents who had fled there a few years before.

In an unusual twist of fate, Helen and Alfons were both living in the United States when Helen saw a newspaper article written by Alfons. Helen contacted Alfons, they discussed their parallel journeys and gave lectures on their different viewpoints of the war and the Holocaust.

More summaries and resources for teaching or studying Parallel Journeys.