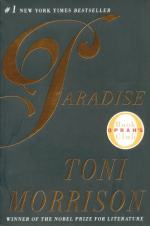 Toni Morrison
This Study Guide consists of approximately 39 pages of chapter summaries, quotes, character analysis, themes, and more - everything you need to sharpen your knowledge of Paradise.

This detailed literature summary also contains Topics for Discussion and a Free Quiz on Paradise by Toni Morrison.

The story opens with the massacre of a group of women living in a place called the Convent. The murderers are all men of the nearby town of Ruby, named for Ruby Best who was the first of the town's inhabitants to die. Ruby, the town, was founded by a group of black families who were seeking to create something of a utopian society. Among those founders are Steward and Deacon Morgan who are also the owners of the bank and among the wealthiest and most powerful families in town. The Morgans have a nephew named Coffee who is called "K.D." - or "Kentucky Derby," because he won a race as a very young boy early in the town's history.

K.D. has sex with a young girl named Arnette Fleetwood who becomes pregnant. Steward and Deacon make arrangements with Arnette's family to provide financial support and Arnette, in return, will leave town in the fall prior to the baby's birth. Instead, Arnette runs to the Convent, pleading with them for help. Over the years, she isn't the only person who's sought help at the Convent.

A woman named Connie, taken in off the streets as a girl of nine by a group of nuns, has lived most of her life at the Convent, remaining even after the last of the nuns has left or died. In the following years, several women take up residence there. Mavis Albright is a mother of five who let her infant twins suffocate in a car. Gigi is looking for a meeting place described for her boyfriend but discovers that it doesn't exist. Pallas is a wealthy girl whose boyfriend had an affair with Pallas's mother. When she arrives at the Convent, she's pregnant. Seneca is fleeing a relationship with a boyfriend who is in jail. The people of Ruby begin to see signs that there is evil at the Convent and blame the women for a series of problems, including the birth of several handicapped children.

While the fabric of the town begins to unravel, the inhabitants form opinions as to the cause. Several of the elders decide that they'll take matters into their own hands and set out for the Convent, ostensibly to scare the women into leaving. But the confrontation turns into a blood bath and the women are slaughtered. However, when the undertaker returns to pick up the bodies, there's no sign of the horror and the town's people, at least for the moment, remain safe from the inquiring of a "white law" from the nearby town of Demby, Oklahoma. The book ends with several of the women visiting their homes and families though they are obviously apparitions.

More summaries and resources for teaching or studying Paradise.