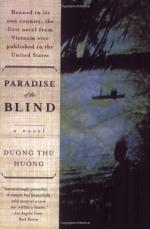 Dương Thu Hương
This Study Guide consists of approximately 20 pages of chapter summaries, quotes, character analysis, themes, and more - everything you need to sharpen your knowledge of Paradise of the Blind.

Paradise of the Blind Summary & Study Guide includes comprehensive information and analysis to help you understand the book. This study guide contains the following sections:

This detailed literature summary also contains Topics for Discussion on Paradise of the Blind by Dương Thu Hương.

The story begins with Hang, a young Vietnamese woman, who works at a textile factory in a Russian suburb. She receives a telegram to visit her uncle immediately. As she reluctantly makes the thousand-mile trip to Moscow, she recounts her dislike and hatred for her uncle, and her families’ history that has led her to this moment in time. Though this novel would be classified as historical fiction, for Hang it is her coming-of-age story. The present-day plotline takes place mainly on the train as Hang dips back into reveries of her past in Vietnam.

Hang’s maternal grandparents died when her mother was young, leaving her mother and uncle orphaned. Hang’s mother’s brother was taken in by the friend of the family and put to service in the Communist army. When he returned, his sister had married a neighbor and they lived together in her parent’s ancestral house. Though her husband’s family had recently inherited land and a home, Hang’s father’s family was not wealthy.

When Chinh, Hang’s uncle, returns from war he is now a general in the communist regime and is implementing the redistribution of land to peasants. He kicks Hang’s father, Tan, and the family, out of their home. He then gives away their land and forbids his sister to stay married to him. Ashamed, Tan leaves the village. Shortly after the redistribution of land, from the landowners to the peasants, begins the period of the “Rectification of Errors”, where the government attempted to give the land back to the landowners. One evening the townspeople come in anger to Hang’s mother’s home—they want retribution for what her brother has done. In fear, she flees to Hanoi.

Hang’s mother lives in Hanoi for ten years until one day her husband shows up. In a moment of lust, they have intercourse and she conceives Hang. He is married now to another woman in a village and out of his shame, returns home and kills himself.

Hang lives with her mother in Hanoi in poverty as her mother ekes out a living vending snacks on the street. Hang knows nothing about her father until they are forced to visit the village to get money from the sale of their house for the uncle. On this initial trip to the village Hang meets her aunt, who for years has slept little and done back-breaking work to rebuild a life for herself. She has built a fortune and is much respected in the community. She loves Hang and will do anything to honor her brother’s blood. She still harbors resentment and anger toward Hang’s mother for defending her brother when he has brought both families shame and heartache.Uncle Chinh has two children and they live in a communist bloc of apartments in Hanoi. Hang’s mother pities them and because they are of her blood, she feels that she must help them. Even though Chinh and his wife are communist party leaders, they welcome and except all of Hang’s mother’s lavish gifts of food and money. Hang’s mother begins making sacrifices at the cost of caring for herself and her daughter. Simultaneously, Aunt Tam has said that she will buy Hang whatever she needs. Because of this, Hang and her mother’s relationship suffers.

Hang’s mother is in a terrible accident which leaves her with only one leg and Hang must quit her university studies to help her mother make a living. Aunt Tam has refused to help Hang’s mother in any way. Due to Vietnam’s economic situation, Hang goes to the Soviet Union as an “exported worker” to earn money working in a textile factory. She returns when her aunt is very ill and dying. Her aunt dies and leaves Hang her entire fortune. Though her aunt has made her promise she would never leave the village and would honor the ancestors by living in this house, Hang wants to get far from the village and the dark stories it holds. She breaks her promise and plans on living elsewhere, somewhere far away where her past can’t haunt her.

More summaries and resources for teaching or studying Paradise of the Blind.

Paradise of the Blind from BookRags. (c)2022 BookRags, Inc. All rights reserved.