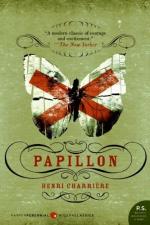 Henri Charrière
This Study Guide consists of approximately 30 pages of chapter summaries, quotes, character analysis, themes, and more - everything you need to sharpen your knowledge of Papillon.

This detailed literature summary also contains Topics for Discussion and a Free Quiz on Papillon by Henri Charrière.

Henri Charriere, known as Papillion for his butterfly tattoo, is accused of murdering a "pimp and stool pigeon" and finds himself in court awaiting the trial. Despite his attorney's assurance that there is no real evidence, he is found guilty and sentenced to life in prison. Papillion is immediately faced with a decision. He has to almost immediately make a decision whether to appeal the sentence, Papillion decides that he will focus everything he has on escape rather than trying to get a new trial to have the sentence reversed or lessened, fearing that he would be sentenced to many years in prison regardless and would then be faced with the need to escape anyway. With the determination to escape and with some money stowed in a metal container carried in his intestine by way of his anus, Papillion begins his sentence.

Papillion soon finds the opportunity to make an escape but is double-crossed by a man named Jesus who sells him a leaky boat. Papillion soon makes the acquaintance of the first of many who give him advice and help on his way to his eventual freedom. Aided by a group of lepers, Papillion and his two companions make good their escape but are taken into custody in Venezuela. When Papillion has an opportunity to escape from this newest form of prison, he finds himself accepted by the Indians of the country. There, he is taken as "husband" by a woman and soon lives as a family with both this woman, Lali, and her younger sister. Both are pregnant by the time Papillion realizes that he will never have peace without going on to seek out revenge against those who wrongfully accused him. He is soon captured again and is taken back to prison where he is held in solitary for two years. At the end of that time, he immediately begins seeking a new opportunity for escape. He has a raft built and secrets it away for later assembly but is captured in the assembly process and sent again to solitary. An effort to save a young girl who is in danger of being attacked by sharks results in his sentence being commuted so that he serves only nineteen months of the eight years of this sentence.

In the relative freedom of the main prison, Papillion goes to great lengths to make himself appear crazy. From the island's asylum, he makes another attempt but is driven back by rough seas and his partner in this effort is killed. Papillion then discovers a place where he can hurl himself into the sea with a good possibility of being dragged to sea by the current. Armed with a makeshift raft of bags filled with coconuts, he does so and the first leg of his escape is successful. He finds himself eventually in Venezuela and there waits out a shorter sentence in a quest for freedom to live among these people.

More summaries and resources for teaching or studying Papillon.