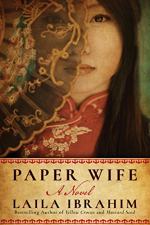 Laila Ibrahim
This Study Guide consists of approximately 48 pages of chapter summaries, quotes, character analysis, themes, and more - everything you need to sharpen your knowledge of Paper Wife.

The following version of this book was used to create the guide: Ibrahim, Laila. Paper Wife. Lake Union Publishing, 2018.

Paper Wife is divided into 25 chapters and has a brief epilogue. This guide deals with five chapters at a time to form five distinct sections, with the last section containing the additional epilogue.

Chapters 1 - 5 introduce Mei Ling, daughter to an impoverished family in China whose fortunes are so bleak that they must marry of Jah Jeh, Mei Ling's sister, to a stranger who will take her to America, where he lives. The day she is meant to leave the family home and travel to meet her husband, Jah Jeh is too ill to move. So, the family sends Mei Ling in her place. Mei Ling is devastated and scared but goes through with the wedding in a matter of hours, meeting her husband, Kai Li, and Bo, his three-year-old son. She learns that she must pretend to be her husband's first, deceased wife in order to pass immigration standards in America. Thus, she begins to study her new identity and boards the ship which will take her, Kai Li, and Bo to San Francisco.

Chapters 6 - 10 describe the grueling journey by boat to San Francisco. Little Bo quickly gets attached to Mei Ling and to Siew, a little girl he befriends who is being taken to America by a man she says is her uncle. Mei Ling befriends a woman named June Young, who encourages her to embrace her new marriage and life and to study hard for the immigration test. After four weeks of travel and a great deal of bonding, Mei Ling, Bo, Siew, and June arrive at Angel Island after dropping Kai Li off at San Francisco. They, as immigrants yet to be granted legal permission to stay in the country, must undergo immigration questioning. After a few weeks of confinement on the island, Mei Ling passes the immigration test, taking Bo with her and promising to visit June in Oakland, where the woman lives with her kids and family, and promising to try to locate Siew at her uncle's house.

In Chapters 11 - 15, Mei Ling is sad to realize her husband is quite poor. He is a servant in a white household, can afford only one room for all of them to live in, and makes little money. Pregnant and fearful that, if she has a girl, her husband will disown her, Mei Ling does not let herself grow too attached to her new situation, though she is hopelessly attached to Bo already. However, when the time comes for her to give birth, her husband is supportive of her. She has a daughter, and Kai Li loves the little girl and is overjoyed at her birth. Mei Ling and Kai Li, from that moment on, understand that they love each other and will support each other in life.

In Chapters 16 - 20, Mei Ling and her husband relocate to Oakland, where her husband gets a better job. They reunite with June, spend time with their children in their new, large and beautiful apartment, and they even track down Siew, who is a servant in a white household. Siew's uncle clearly does not take care of her. Mei Ling promises to find out how to rescue Siew, and confesses this to Kai Li. Kai Li then decides to offer his services as cook to the household in exchange for Siew's freedom. She comes to live with them, and is overjoyed at being reunited with Bo and little Joy, Kai Li and Mei Ling's daughter.

In Chapters 21 - 27, Mei Ling is still worried about Siew. Her 'uncle' is not her real uncle, but rather a man who, in order to pay off his gambling debts, agreed to bring over a young girl -- Siew -- to be groomed for prostitution in partial payment of that debt. Mei Ling is horrified when Jack Wong, the man who had posed as Siew's uncle, reveals all of this to her and her husband and threatens to tell the men he owes where Siew is. Mei Ling hatches a plan and, one night when Jack Wong is very drunk, she pushes him into the water of San Francisco Bay, killing him.

The epilogue sees Mei Ling, Kai Li, Bo, Joy, and Siew convening around Siew to wish her well in college. A decade after the main events of the book, the epilogue describes how the family has found material and emotional stability in the United States, and states that Mei Ling's crime was never discovered. Her action saved her family from falling apart, ensuring their longevity and proving that her Dragon zodiac sign is accurate: she is passionate and would do anything to defend those she loves.

More summaries and resources for teaching or studying Paper Wife.