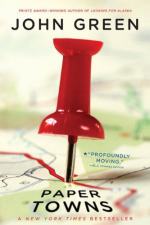 John Green (author)
This Study Guide consists of approximately 36 pages of chapter summaries, quotes, character analysis, themes, and more - everything you need to sharpen your knowledge of Paper Towns.

This detailed literature summary also contains Topics for Discussion and a Free Quiz on Paper Towns by John Green (author).

Paper Towns is the story of a boy named Quentin Jacobsen and the adventure he is drawn into by his childhood friend and secret love Margo Roth Spiegelman. As children, Quentin and Margo discovered a dead man's body; an event that binds them in ways they do not realize. As they grow up however, they grow apart. After this is explained in the prologue, Part I of the book sets up the main narrative by introducing the setting, Jefferson High in Orlando, Florida in the early 2000s and introduces Quentin's good friends, Radar and Ben Starling, his fellow nerds. In contrast, Margo is the most popular girl in school who has an incredible reputation for her wild hijinks. The plot takes off in Chapter 3 when Margo sneaks into Quentin's bedroom and asks him to help her execute an eleven-part plan, which largely involves taking revenge on her ex-boyfriend. Throughout the night, Quentin is exhilarated and his love for Margo is reenergized.

In Part II of the book, Margo completely disappears and Quentin wonders if he will see her again. However, Margo has left him a series of clues as to her whereabouts. Part II is spent piecing together Margo's clues. Quentin pursues Margo with the help of his friends, but all the while, high school comes to an end. Quentin follows a string of false leads, which makes him increasingly reflective and leads him to gradually accept that he has made Margo into a magical non-person, a "paper girl" and that he loves someone who may not exist. He eventually decides that the only way to ind Margo is to understand who she is. Throughout Part II, Quentin grapples with Margo's use of the phrase "paper towns" in her clues. Eventually he figures out that a paper town is a false city on a map that cartographers once used to detect copycats. Margo had left for the paper town of Algoe, New York.

Part III begins the night of graduation when Quentin grabs his friends to leave on an intense, twenty-one hour road trip from Orlando to upstate Agloe. Quentin, Radar, Ben, and Ben's new girlfriend Lacey, must catch Margo the day before she leaves Agloe forever. When they reach Agloe, they find Margo in an old barn, writing. After fighting furiously about Margo's apparent selfishness for leaving, Ben, Radar, and Lacey storm out. Quentin and Margo learn that they had idealized one another and love each other. However, they both realize with regret that their love was based in falsehood, in being a "paper boy" and a "paper girl." Margo left in order to release everyone from the effects of her false, public personality. Quentin, however, does not give up on Margo. They admit their romantic affections for one another but realize that their values must inevitably lead them to separate futures.

More summaries and resources for teaching or studying Paper Towns.