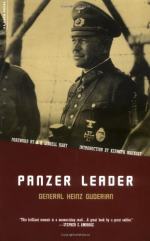 This detailed literature summary also contains Topics for Discussion and a Free Quiz on Panzer Leader by Heinz Guderian.

The book PANZER LEADER is a memoir of Col.-General Heinz Guderian about the formation and deployment of the German Panzer (tank) forces during WWII. Guderian begins the book with the circumstances in which he becomes a leader of Panzer development and theory in Germany after World War I. When Hitler comes to power in 1933, Guderian gets the opportunity to develop new, large Panzer divisions and have these coordinate in battle with the Luftwaffe (German Airforce). There is much pride expressed by Guderian as Germany rearms and "peacefully" absorbs territories in Europe. Even when Poland is attacked there is the German-Soviet Agreement, which promises to limit the war after the defeat of Poland to a war against the Western Powers. In the attack on France in May 1940, Guderian has his finest moment when he is a key executor of the Manstein Plan and German forces pass over the Meuse River and turn north towards the Channel ports. The only dark spot for Germany is the successful evacuation of the British Expeditionary Force at Dunkirk. Guderian ascribes this to demands by Goering and the Luftwaffe for a special role in the battle. When Hitler decides to attack the Soviet Union, there are misgivings from Guderian because the war with Great Britain continues. Guderian demands a war of quick movement with disregard of flanks in order to quickly capture Moscow. This is carried out in the first two months of the campaign, but then Hitler decides to turn the armies south to the Ukraine and Kiev. As Guderian fears, this leads to German forces being stuck and stopped before Moscow as the mud season and the harsh winter arrive. Soon after, Guderian is dismissed.

Guderian is returned to active duty after the disaster at Stalingrad. In February 1943, he is appointed the Inspector of the Armored Forces. Guderian helps reorganize the Panzer divisions and simplify the production of tanks and self-propelled guns, though often Hitler refuses to listen to his advice. Guderian tries to prepare German forces in the West for the impending Western Allies' landing in France. He fails in this due to Western air attacks and the demoralization of Field Marshall Rommel, German commander in this sector. After the plot against Hitler of July 20th, 1944, Guderian is appointed the Army Chief of Staff. Still, Guderian's calls for two lines of defense with sufficient depth and for strategic withdrawals are refused by Hitler. The result is a huge Russian breakthrough following their attack of January 12th, 1945. Guderian stays loyal to the Nazi regime until he is put on sick leave in late March 1945.

Guderian tries to oust the two yes-men at the OKW and OKH, Jodl and Keitel but fails. He wants to go back to the system of real power in the German General Staff. Guderian does make the point that Nazi hostility to the Russian and Ukrainian populations is a key driver of partisan warfare later in the war by populations that had at first looked at the Germans as liberators. Guderian has some understanding of the liabilities of the Nazi regime. Later, Guderian is also frustrated in his attempts to encourage peace talks with the West. Guderian is a loyal soldier of the old mold of the Prussian and German General Staff. He tries to serve Hitler, and finds out the hard way the pitfalls of serving a fanatical dictator.