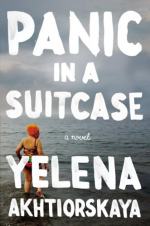 Panic in a Suitcase Quotes

Pasha was in Brooklyn, where both the buildings and the people were in need of fortifying, and he’d be honoring the borough with his presence for all of July – the entire month!
-- Narrator (Part 1, Chapter 1 paragraph 5)

Importance: The narrator reveals here that Pasha has gone to visit his family in Brooklyn in July, 1993, for an entire month. The entire area seems to be wilting in the July humidity, and Pasha’s presence will instill a breath of fresh air, both for his family and his friends in the city.

That was 715 days ago – they were still counting, though it was getting less clear to what end. At first it made the change manageable, marked progress.
-- Narrator (Part 1, Chapter 2 paragraph 2)

Importance: Here, the narrator relates the amount of time that Pasha’s family has been in the United States, and demonstrates that their emigration from the Soviet Union occurred just after the fall of the Communist order. The family keeps...

Panic in a Suitcase from BookRags. (c)2022 BookRags, Inc. All rights reserved.