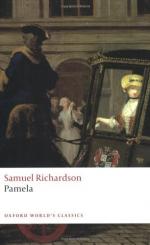 Samuel Richardson
This Study Guide consists of approximately 51 pages of chapter summaries, quotes, character analysis, themes, and more - everything you need to sharpen your knowledge of Pamela, or, Virtue Rewarded.

This detailed literature summary also contains Topics for Discussion and a Free Quiz on Pamela, or, Virtue Rewarded by Samuel Richardson.

After Pamela's lady dies, her son, Mr. B, hires Pamela and is very kind to her. Pamela's parents worry about their daughter's virtue when they learn of his attentions. At Bedfordshire, Mr. B attempts Pamela's virtue several times, but she refuses him. Mrs. Jervis defends Pamela, but he also accuses Pamela of sullying his reputation and eventually allows her to leave unattended. Pamela is transported to Mr. B's Lincolnshire estate where she is held under the close supervision and persecution of the cruel Mrs. Jewkes. Pamela begins a secret correspondence with Mr. Williams, a local clergyman, who tries to help Pamela escape. Mr. B suspects a romantic liaison between Pamela and Mr. Williams and has the clergyman falsely imprisoned for debt. Pamela fails in her attempts to escape, and Mr. B arrives at Lincolnshire to attempt Pamela's virtue several more times. Mr. B fires several of his Bedfordshire servants for attempting to warn Pamela of his scheme to betray her with a sham marriage.

After Pamela insults Mr. B, Pamela is dismissed and begins her journey to her parents' home. Mr. B reads Pamela's journal and is touched by his cruelty and her forgiveness. He writes to Pamela, begging her to return and marry him. Pamela returns, and Mr. B proposes. Mr. B renounces his sister for writing a saucy letter condemning him for ruining or marrying Pamela. Pamela meets the neighborhood gentry who praise Pamela's beauty and virtue. Mr. Andrews, Pamela's father, arrives in Lincolnshire and is reunited with his daughter. He leaves, happy with her current situation. Pamela and Mr. B secretly marry and are happy together. Lady Davers visits and torments Pamela because she believes Pamela is unmarried and has relinquished her virtue. After several conflicts between Lady Davers, Mr. B and Pamela, Lady Davers is reconciled to the match and praises Pamela.

Pamela and Mr. B return to Bedfordshire where the servants loyal to Pamela are reinstated. Pamela meets Miss Goodwin, Mr. B's illegitimate daughter, and obtains Mr. B's permission for the girl to visit on her next break from school. Pamela is perfectly happy, with the sole exception of desiring to become pregnant. Mr. B places Pamela's parents in his Kentish estate. Mr. B and Pamela love each other very much and are happy. Pamela serves as an example of the rewards that sustained virtue can reap.

More summaries and resources for teaching or studying Pamela, or, Virtue Rewarded.