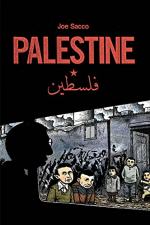 Joe Sacco
This Study Guide consists of approximately 35 pages of chapter summaries, quotes, character analysis, themes, and more - everything you need to sharpen your knowledge of Palestine.

Palestine is a journalistic graphic novel about Joe Sacco's journey to Israel and Palestine in 1991 and 1992. Sacco is a Maltese-American citizen schooled in journalism and art. Equipped with this education, he aims to produce a work that offers an authentic take on the Palestinian refugee crisis and investigates the pro-Israel narrative he has heard all his life.

The graphic novel opens in Cairo where Sacco is en route to Palestine. Tensions are high about the conflict and the Muslims Sacco meets have heated anti-Israel sentiments. Sacco meets many citizens in Palestine who have suffered at the hands of the Israeli soldiers, from imprisonment, to torture, to the murder of family members. Sacco investigates the Zionist origins of Israel and how the movement's racism created the current conflict and refugee crisis. Sacco visits settlements and Israel protests.

Sacco journeys to many refugee camps to interview Palestinians. He hears harrowing accounts of Israeli Soldier brutality towards the refugees. He interviews children in hospitals, unemployed men, and impoverished school teachers. The author parses how systemic racism on both sides perpetuates the conflict. Grudges towards both sides are handed down to each generation, keeping the fighting at a perennial boiling point. Sacco interviews ex-prisoners and learns that most Palestinian men are imprisoned on wrongful convictions and that going to prison is a rite of passage. The prisons are humanitarian disasters with squalid conditions.

Sacco partners up with a Japanese photographer named Saburo and they interview refugees together. They learn about children murdered by Israeli soldiers. The stories are difficult for Saburo to endure, but Sacco has little problem putting them to paper. Sacco interviews a man named Ghassan who was wrongfully arrested for a crime and brutally tortured. Ghassan was almost left for dead until a court ordered his release. Sacco explains Ghassan's story is not the exception. Sacco investigates how non-stop conflict and racist policy is crippling the Palestinian economy. Because of arbitrary and dense bureaucracy, Palestinian businessmen cannot turn a profit despite otherwise successful business ventures. Sacco interviews women and questions the hijab. He determines that Muslim women believe they have a choice yet they are punished if they go against society.

Sacco teams up with a Palestinian man named Sameh who lets Sacco stay with him. Sameh organizes more interviews for Sacco. Sameh's job is put in jeopardy because he helps Sacco, but Sameh persists. Sacco witnesses more depravity and suffering in the world's worst refugee camp, Jabalia, which has the highest population density in the world. Sacco interviews young boys, some paralyzed because of fighting, who work for rebellion and learns their families support them.

Sacco ends his investigation by getting the other side of the story- the Israeli side- by spending the day with a couple Jewish girls in Tel Aviv. They profess to sympathize the Palestinian cause but believe their government's propaganda about Palestinian aggression. Sacco tries to say goodbye to his various friends, but the realities of daily conflict in the camps make it impossible. Before leaving, Sacco visits Bethlehem for midnight mass on Christmas Eve, where the Palestinians are kept out via guards and barbed wire. Sacco leaves on a bus that gets lost on the way through a refugee camp.