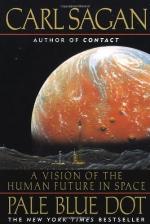 Pale Blue Dot: A Vision of the Human Future in Space Summary & Study Guide includes comprehensive information and analysis to help you understand the book. This study guide contains the following sections:

This detailed literature summary also contains Topics for Discussion and a Free Quiz on Pale Blue Dot: A Vision of the Human Future in Space by Carl Sagan.

Pale Blue Dot may initially appear to concern space and space travel; it is, after all, written by the famous astronomer and popular science writer Carl Sagan. Indeed, many chapters of Pale Blue Dot focus on the geology of the planets in the Solar System, how to travel to Mars, the history of the Voyager probes, and so on. However, Sagan has a broader aim, for Pale Blue Dot is arguably a work of post-Christian Western theology. In fact, the book's subtitle is "A Vision of the Human Future in Space" and in fact, it is just that.

The first four chapters outline Saganic theology. First, Sagan points out that humans seem born with a certain self-importance. They see themselves as the center of the universe and think that their conflicts are all-important and worthy of their total devotion. He sees men, as do many in Western religions, as arrogant but foolish, and as beings who consider themselves strong and noble but are in reality weak and petty. Sagan's man is fallen, although the stars hold the promise of human unity and redemption.

When we view Earth from far away, we see a "Pale Blue Dot" and it is this vision, Sagan believes, that should impress upon us how meaningless we are, how little we matter and how pathetic our fights are. Sagan then gives a spiritual, stylized history of humanity, where science rather than God humbles man's self-importance. Man passes through a series of "Great Demotions" as science progresses.

Initially man is superstitious and places himself and the Earth at the center of the universe. But astronomy and biology are liberators because each successive stage in the progress of these sciences show that man's fantasy of himself as unique is mistaken. His religions, his Gods - all of these things are illusions, and in Chapter 4, "A Universe Not Made for Us" Sagan argues that our position in the universe appears without any providential element.

Pale Blue Dot has twenty-two chapters and chapters five through eighteen cover a variety of important material about science, the structure of the universe, the geology of the planets, space flight and so on. Sagan discusses how to explore other worlds and protect the present one and worries openly about how to avoid various threats of apocalypse. In the last four chapters, Sagan argues passionately that our future lies in space and that our space exploration can bring us together but helping us to see how important it is to get along in a universe that is indifferent to us.

In the end, Sagan advocates the development of a religion that places humanity at its center, but emphasizes his fallibility and interconnectedness. It will give humans hope but through science and the intellect rather than faith and mysticism. With this religion we will go, "To The Sky!" as Chapter 21 is titled. In Chapter 22, Sagan foreshadows the human future across the stars and speculates on how we can recover a sense of human purpose in a Godless Cosmos.

Pale Blue Dot: A Vision of the Human Future in Space from BookRags. (c)2022 BookRags, Inc. All rights reserved.