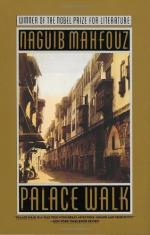 Naguib Mahfouz
This Study Guide consists of approximately 83 pages of chapter summaries, quotes, character analysis, themes, and more - everything you need to sharpen your knowledge of Palace Walk.

Describe Maryam's roles in the novel. Are her various personas consistent? Is she more a woman or a symbol of womankind? Give examples.

How is young Kamal used in the novel to explore the institution of marriage and its rituals?

How do mothers in this novel counsel their daughters to react to their husbands' bad behavior? Does it have the desired effect or is the younger generation in early twentieth-century Egypt unwilling to play the traditional role?

How does British imperialism provoke Islamic radicalism? Does the novel provide insights into the present state of the Middle East?

How to Ahmad Abd al-Jawad and his son Yasin compare and contrast? What other factors help form Yasin's personality?

How is the sexual "double standard" portrayed in the novel? How do the men justify their actions?

How is martyrdom treated in the novel? Is it heroic, tragic...