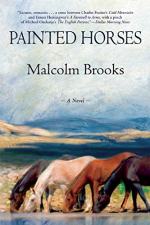 Malcolm Brooks
This Study Guide consists of approximately 47 pages of chapter summaries, quotes, character analysis, themes, and more - everything you need to sharpen your knowledge of Painted Horses.

Aspiring archaeologist Catherine Lemay travels to Montana in the summer of 1956 to give her opinion as to whether or not there is anything of historical value in a remote canyon that would be lost as a result of a hydroelectric dam project that would flood the canyon. While there she meets, and falls in love with, John H, an old mustanger and World War II vet. What he teaches her during their short time together in Montana forces her to choose between romance and ambition as well as tradition and progress.

River Basin Surveys hires Catherine Lemay on behalf of the Smithsonian and the Army Corps of Engineers to look for anything of Crow Indian heritage worth preserving that would prohibit the building of a hydroelectic dam that would flood the canyon. When she arrives, she expects to meet the head of the utility, but instead only receives a letter with her name misspelled stating that he does not expect her to find anything and that everyone, even the Crow, will only experience gains from the dam. The letter also states that he'll send a guide to help her navigate the canyon.

After a few days, there's no sign of the guide, so Catherine decides to explore the canyon on her own. She stops by a service station and gets advice from its owner, Max Caldwell. Still, she overestimates her capabilities. Her mode of transportation, an old Dodge ambulance, gets a flat tire and rolls into a ditch as she tries to change it. She's saved however, by John H who she's meeting for a second time. The first time she literally ran into his painted horse while waiting for her train journey to continue.

Her guide, Jack Allen, finally arrives. He knows the land, but can't help her in terms of Crow Indian lore and give her an idea of where to start. She turns to Max Caldwell who suggests that she seek out a girl named Miriam. Catherine follows his advice and convinces Miriam to help her. Miriam warns her, though, that she's doing it for her own best interest, not Catherine's.

The two women begin exploring the canyon with Allen, but soon realize that he's taking them all over the place and not even covering certain areas. They decide to attempt to beat him at his own game and suggests that they camp out. They do and Catherine finds a bird point. At the same time, Allen tries to find the horses that he's been looking for.

The three come out of the canyon and Miriam invites Catherine to the Crow Indian celebration that's taking place in town. Catherine attends and runs into John H again. The two talk and dance, but Jack Allen and Dub Harris interrupt their evening.

Jack, Miriam, and Catherine go back into the canyon and this time Catherine finds glyphs and stone carvings that she thinks may be valuable enough to save the canyon. Miriam also sees them, but Jack doesn't seem to. When Catherine announces that she has just gotten her period, Jack voluntarily leaves. The girls plan to return, but when Miriam finds out about the death of her great-grandmother, she goes back home. Catherine decides to go alone because she's sure that Jack will be going back as he heard the horses he's been looking for.

Catherine goes back alone, but gets lost. In the end she follows what she thinks is a crane, or at least the spirit of a crane, to John H's house. The two have sex and while he does help her return to the glyphs and take pictures, she spends too much time with John H instead of continuing her work. When they return, they find out that Jack and Dub Harris' people have beaten them there. Catherine gives John H the film and tells him to send it to David on the East Coast. She faces Jack and they sweep her away to Billings where she's held captive until she writes a report saying that she didn't find anything and it's okay for the dam project to go ahead.

Even though she fights, she finds out just how powerful Dub Harris and his people are. They say that they will make John H's life miserable if she doesn't give them what they want. She finally calls David and tells him to send the film to an address they give her. Then she finds out that the film has been destroyed anyway. She worries about Miriam, but then finds out that Miriam willingly betrayed her and had sex with Jack.

Finally she goes back to the East Coast. She still works in archaeology but does not take on any big projects until a friend of hers convinces her to. This one has the support of the government and goes well. She returns home and one day gets a letter that has been to Israel and back. It is from John H. She writes back.

More summaries and resources for teaching or studying Painted Horses.