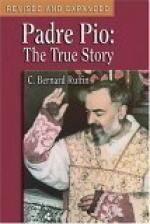 This detailed literature summary also contains Topics for Discussion and a Free Quiz on Padre Pio: The True Story by C. Bernard Ruffin.

Padre Pio: The True Story is a biography of Francesco Forgione (1887-1968) who becomes the world famous Roman Catholic Saint and Capuchin Friar, Padre Pio. Within Roman Catholicism, Pio has the greatest following of any other human being save the Virgin Mary. Beatified by the Roman Catholic Church in 2002, Pio's life is said to be a model of great virtue and love for others. Born in Pietrelcina, a farming town in Southern Italy, most of Pio's life is spent in a friary in San Giovanni Rotondo. Hundreds of thousands of pilgrims visit him, one hundred thousand people attend his funeral and three hundred thousand attend his beatification.

Pio is widely regarded by his followers as having possessed extraordinary supernatural powers. Most famously, Pio always wears gloves to cover his stigmata, holes in his hands (along with his feet and side) that constantly ooze blood. Many claim that Pio miraculously heals them of all number of ailments, knows the sins of his confessors before they tell him and survives on four hours of sleep and four hundred calories a day despite being overweight and spry in his old age. Pio is even believed to have "bilocated" or to be seen in two places at once. During World War II, several American and Italian fighter pilots claim to have seen Padre Pio in the sky.

Bernard Ruffin, the author and a Lutheran historian, approaches these fantastic claims as the subject of rational investigation. While the book is a biography, it is also an attempt to evaluate the evidence for Pio's miracles and to assess criticisms made of him and those around him. Ruffin admits at the end of the book to be a "believer" in Pio, though not in everything claimed for him. For Ruffin, there were simply too many miraculous claims made by too many people, even Protestants and skeptics, for none of them to be true. By all credible accounts, Pio had a heroic character and few faults, according to Ruffin. This verdict will understandably make readers skeptical, but by the end of the book, the reader will nonetheless be overwhelmed by the sheer volume of claims made about Pio's character and supernatural abilities.

The revised version of Padre Pio: The True Story is nearly five hundred pages. It contains thirty-five chapters that are largely arranged chronologically. Chapter 1 introduces the Forgione family and explains the social and historical setting of Pio's birth and youth. The subsequent chapters follow Pio through his childhood, adolescence, novitiate as a Capuchin Friar, ordination, spiritual trials, acquisition of the stigmata, investigation by Church authorities, restrictions on his priestly authority, the spread of his fame, his many miracles, the building of the hospital in San Giovanni Rotondo and finally Pio's death. Several chapters towards the end focus on the specific claims of miracles attributed to Pio. Some of the final chapters focus on the process and significance of Pio's beatification.