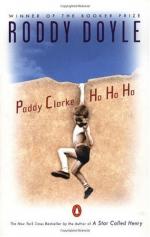 Paddy Clarke Ha Ha Ha is a story about an Irish lad, named Paddy Clarke, growing up in the 1960's. He runs around with a gang of friends who enjoy terrorizing the streets of Barrytown. He and his friends like to start fires, write their names in wet cement, harass elderly ladies, and wreak havoc on the neighborhood bushes.

In school, when Paddy applies himself to learn, he is very smart. In the beginning, he is more worried about keeping on the good side of his best friend Kevin, who is the leader of the pack. Kevin is the one who doles out punishments in their "games," and if you are on his bad side, you get whipped. Paddy often picks on Sinbad, his brother, when no other target is available to him.

Paddy is right beside Kevin in harassing the other boys until he realizes strange things are going on between his parents. He notices them arguing, and his first reaction is to fix it himself and make his parents happy. He works extra long and hard on his spelling so that he can remain in the kitchen between his parents. He believes his presence will end the fighting. If he can make them laugh right before he departs for bed, he believes the night will end happily.

When the fighting between his parents does not stop, Paddy pulls into himself. His pranks become fewer and farther between. He seeks out the comfort and emotional support of Sinbad. Sinbad has also heard the fighting at night, and has pulled into himself and won't let Paddy in. Sinbad chooses to try and dismiss the fighting as anything other than what it really is. Paddy resents his ability to dismiss it.

Paddy suddenly loses interest in picking on other kids and being Kevin's best friend. He wants to stick close to home and Sinbad. Mr. Hennessey, Paddy's teacher, brings Sinbad into his class one day and tells him to go home and report at once to his mother. Paddy can't see what is wrong, other than the fact that Sinbad had been crying. Paddy turns into the protector of Sinbad and does not report any trouble at school.

Paddy turns on Kevin and fights him after school one day. Paddy realizes this is a monumental change in the hierarchy, and comments that things will never be the same again. He loses his friends and is often teased. He gains better grades in the classroom and moves up to the front of the "smartest" row since he spends so much time in the kitchen studying.

Paddy resorts to various tactics such as staying up all night and listening at his parent's bedroom door to try to keep the peace. His realizes that his efforts are all for naught when he witnesses his da hitting his ma one night when he goes to get a drink of water in the kitchen. From that point on, he knows that they will live without their da, but things should be better around the house, or he can only hope.