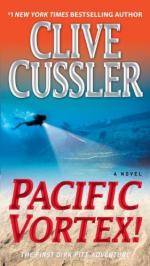 Clive Cussler
This Study Guide consists of approximately 34 pages of chapter summaries, quotes, character analysis, themes, and more - everything you need to sharpen your knowledge of Pacific Vortex.

This detailed literature summary also contains Topics for Discussion and a Free Quiz on Pacific Vortex by Clive Cussler.

Pacific Vortex is a thriller that opens with the main character, Dirk Pitt, lying on a beautiful Hawaiian beach. Gazing out over the sea, he spots something glistening in the waves. He swims out to retrieve the item, which turns out to be a communications capsule from a missing nuclear submarine. He opens the capsule and reads the contents, a missing twenty-six page section of the ship's log. In it, the captain, who has apparently gone over the brink of madness, tells of the strange goings-on in the Pacific Vortex, an area of the Pacific that is like the Bermuda Triangle with strange disappearance of ships.

Pitt, a scientist and adventurer, is thrown into the world of international intrigue with Russian spy ships, sunken islands, assassins, and espionage. After delivering the canister to Admiral Hunter, later that evening Pitt experiences being the object of his first assassination attempt at the hands of the lovely Summer Moran. He doesn't yet realize that the events in the hotel bar are related to the canister and the ship's log. The missing U.S. submarine, the Starbuck, was on a test voyage when she went missing. On board are nuclear warheads.

Pitt, who is a scientist for the NUMA, National Underwater Marine Agency and an Air Force Major, is assigned to the Navy at Pearl Harbor for the purpose of finding the missing sub. The nuclear warheads could fall into the wrong hands causing an international disaster if the missing sub isn't found. The captain's log indicates that the ship went off-course to investigate a mysterious fog, radioed its last set of coordinates and referred to a mysterious "they." The Starbuck has entered a mysterious part of the Pacific where numerous ships have disappeared without a trace in the region of the legendary island of Kanoli. What is this mysterious island?

All that is known is that legend has it that the island just mysteriously sunk, without a trace. Before Pitt reports for duty, he checks with a friend, George Papaaola at a museum about the Pacific Vortex, and finds out about Kanoli. Before he can even reach the base, he is followed and shot at. Pitt survives his second of many assassination attempts. Arriving at the base, he is briefed on what the Navy knows about events in the Pacific Vortex. Realizing that the coordinates sent by the Starbuck are fake, they set out on a search mission that evening on the Martha Ann, an undercover salvage ship, to search a different area of the Pacific. There, they find the missing sub, with a crewmember alive, and begin to solve the mystery of the Pacific Vortex, the graveyard for missing ships. As the story unfolds, it becomes obvious that the missing sub has to be removed or destroyed. Those missiles with nuclear warheads and the advanced technology of the Starbuck are worth millions if they fall into the wrong hands, which they already have. Lying on the ocean floor in international waters, the nuclear sub is fair game for any salvage operation, if the salvagers can survive the mysteries of the Pacific Vortex and the missing island of Kanoli. The novel comes to a surprise conclusion in the caves of the underwater island where a secret crime organization of underwater assassins and international thieves has existed for over thirty years, the period during which so many ships met their strange fate in the Pacific Vortex.

More summaries and resources for teaching or studying Pacific Vortex.