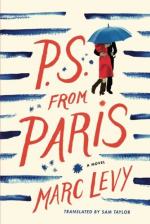 Marc Levy
This Study Guide consists of approximately 34 pages of chapter summaries, quotes, character analysis, themes, and more - everything you need to sharpen your knowledge of P.S. From Paris.

This detailed literature summary also contains Quotes and a Free Quiz on P.S. From Paris by Marc Levy.

This guide refers to P.S from Paris, written by Marc Levy and translated from French by Sam Taylor: United States Edition.

Marc Levy’s novel, P.S. from Paris, is told by an omniscient narrator that sticks close to the main characters, Mia and Paul, though occasionally slips into the minds of other secondary characters when the need arises.

In the first chapter, Mia, an actress with an unfaithful husband, is introduced. She wanted to leave her husband, David, but she still loved him and needed to stay with him in order to keep up appearances for her new film, in which she costarred with David. She decided to go to Paris and stay with her best friend Daisy so that she did not have to deal with the situation or live a lie.

In the third chapter, Paul, an American writer living in Paris, is introduced. He and his best friend Arthur had been architects together at a firm they owned together. Paul had written a novel for fun, and Arthur’s wife Lauren had read it and insisted that it needed to be published. Once it became famous, Paul had panicked and left the States to hide out in Paris, where he had been living for the past seven years.

When Mia noticed that Daisy belonged to a dating site, she decided to make a profile for herself, in which she lied and said she was a chef that owned a restaurant. Meanwhile, Paul’s friends, Lauren and Arthur, arrived to visit him. They suspected that he was lonely, even though he said he was in love with his Korean translator whom he saw twice a year. They made a profile for him and set him up with Mia.

Mia and Paul met on an awkward first date in which both of them though the other one was crazy. Once they discovered what had happened, they decided that they liked each other in a platonic way and wanted to be friends.

Paul left his phone with Mia on accident, and they met up at the opera house so that she could give it back. They talked about Paul’s new novel about an opera singer. Then, Paul told Mia that he could get her a secret tour of the opera. But, when he asked the manager for permission to bring Mia along with him, the manager said no. So Paul sneaked Mia up onto the roof of the opera house anyway, and the two of them were arrested. Paul’s editor came to bail them out. No charges were pressed.

Paul and Mia continued to spend time together. Mia read Paul’s books, and Paul bought Mia a gift. Paul came over to Mia’s house. Everything was awkward because Daisy was hogging all of Paul’s attention. Mia and Paul got in a fight and ended up kissing. They planned a nice dinner together; however, David showed up which kept Mia from going to dinner at Paul's.

Mia and David decided to go back to London, and Paul got ready to go to Korea. At the airport, Mia left David and got onto Paul’s airplane. They made up, and when they got to Korea, Mia pretended to be his assistant.

In Korea, Paul discovered that the Korean translation of his novels had been replaced with his translator’s personal story of life in North Korea. He told Mia about his discovery, and then he and Mia had sex. The next day, Paul decided to go along with his translator’s story so as to protect her identity and her story. Mia saw him talking to his translator and left Korea. Paul tried to chase after her, but her plane had already left.

Paul went back to Paris and discovered that Mia had returned to London with David. He also discovered that she was really a famous actress. Paul was sad, but he focused his energy on writing a new novel in which he revamped his translator’s story. When his new novel won an award, he went onto television and admitted that he was only a translator, a figurehead, and that the true author was a woman who could not reveal her identity because she was frightened of her family in North Korea being executed in retaliation for her work. Paul left the interview and found Mia outside, waiting for him. They kissed, and agreed to go to San Francisco together.

More summaries and resources for teaching or studying P.S. From Paris.