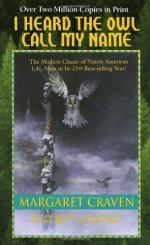 Margaret Craven
This Study Guide consists of approximately 45 pages of chapter summaries, quotes, character analysis, themes, and more - everything you need to sharpen your knowledge of I Heard the Owl Call My Name.

Margaret Craven was born on March 13, 1901, in Helena, Montana, and grew up in Sacramento, California.

Aspiring to be a writer, she attended Stanford University and graduated in 1924 with honors. After a brief stint as a secretary for a San Jose newspaper, she showed enough skill to take on writing assignments. Shortly after this, Craven lost most of her eyesight in an accident and found herself unable to undertake the novel she had long planned to write. But she became a successful short story writer, publishing many of her works in such leading magazines as the Saturday Evening Post and the Ladies' Home Journal.

During the 1960s, Craven read an article about the plight of the Kwakiutl Native Americans of British Columbia.

Inspired by the story, she wrote a short story called "Indian Outpost." Oddly enough, at this time her vision began to improve dramatically...

I Heard the Owl Call My Name from BookRags. (c)2023 BookRags, Inc. All rights reserved.