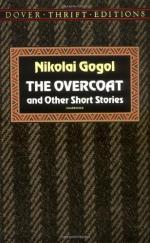 One famous passage in "The Overcoat" describes how one of the clerks in the office is touched by Akaky Akakievich's protest against the teasing from his fellow workers. This passage has been the subject of considerable debate: it seems to suggest that we should feel sympathy for Akaky, but many readers disagree. What do you think?

What is the role of the narrator in this story? How would the story have been different if it were told in the third person? How much like or unlike Gogol do you think the narrator is?

One definition of "allegory" is: "a method of telling a story in which characters and events are meant to represent moral or spiritual concepts more significant than the actual narrative itself." To what extent does "The Overcoat" fit this definition?

Research the philosophical debates in Russia in the 1830s...