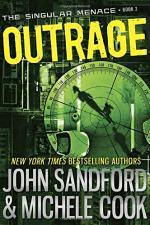 Shay Rembly is a 16-year-old girl who leads the group determined to bring Singular down. She is pretty but tough, an avid climber, courageous, and morally astute. She is deeply horrified by the experiments and murders that Singular has been conducting, though she is thrilled to have rescued her brother, Odin, from the clutches of the company. Together with Odin and their group of friends, Shay carries out raids on Singular targets and associates. When the raid on the Singular ship is conducted, Shay and Harmon find themselves trapped. Shay, however, is not worried at all because he believes Singular is on the run.

Odin Rembly is the brother of Shay, is an animal rights activist, computer hacker, and high-functioning autistic though he is still prone to outbursts when things don’t go his way, or when the stress builds on him. Odin serves as the group...