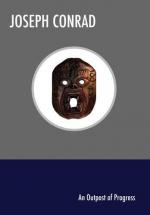 Joseph Conrad
This Study Guide consists of approximately 27 pages of chapter summaries, quotes, character analysis, themes, and more - everything you need to sharpen your knowledge of Outpost of Progress.

Conrad's story is presented as a narrative. Although nameless, the narrator feels like a bitter colonist who is now standing slightly overhead, observing the actions of those who are still behind him in psychological understanding and sociological development. In fact, one feels that this story serves to deliver a political and sociological message under a thin veneer of a work of fiction.

It has been argued that Conrad himself was at once a racist, and a stronger objector to racial relations in colonial Europe. Certainly, both of these descriptions of him can be argued from the text. For example, the narrator states, "The contract with pure unmitigated savagery, with primitive nature and primitive men, brings sudden and profound trouble to the heart." Chapter 1, page 3

Later, the narrator makes reference to the ten native men at the trading station, saying: "But belonging as they did, to a...

More summaries and resources for teaching or studying Outpost of Progress.