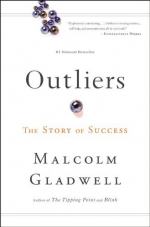 Outliers: The Story of Success Summary & Study Guide includes comprehensive information and analysis to help you understand the book. This study guide contains the following sections:

This detailed literature summary also contains Topics for Discussion and a Free Quiz on Outliers: The Story of Success by Malcolm Gladwell.

Outliers is Malcolm Gladwell's examination of what makes some people phenomenally more successful than others. These "outliers," as he calls them, are commonly thought to possess talent and intelligence far above that of the average person, but he challenges this popular belief by looking at the background of some notable outliers.

Gladwell begins with an examination of the small town of Roseto, Pennsylvania. The town is noted for having a remarkably low rate of heart disease among its residents. After eliminating possible causes such as diet, genetics and other factors, researchers conclude that it is the social structure of the tight-knit community that keeps them relatively healthy. The town is founded by Italian immigrants from the same place in Italy and Gladwell explains how they transplant their cultural traditions to their new home and how those traditions endure through generations in a "cultural legacy" that makes the town an "outlier."

Gladwell also looks at a phenomenon in Canadian junior hockey. The best players, it is noted, are born in the first three months of the year. Investigators discover that this is likely because the cutoff date to play in the age-based junior leagues is January 1. This means that children born shortly after that date are usually the biggest on their teams and have more experience playing than those born later in the year. They are the most likely, then, to be chosen for the more elite leagues and gain even more experience playing.

Gladwell then applies this finding to look at successful people like Bill Gates and The Beatles. He finds that in each case, these successful people have opportunities early on to gain an enormous amount of experience. Bill Gates has access to a computer terminal while in middle school at a time when only large schools and corporations have computers. The Beatles are hired to play nearly non-stop in Hamburg nightclubs before they start seeing success as a recording act.

In addition to receiving an opportunity to gain experience, a successful person also benefits from his cultural legacy. Gladwell contrasts the legacies of Asian cultures that center on the year-round intensive farming of rice with Western cultures that center on farming less intensive crops. Asian cultures prize hard work more, he claims, and this legacy is partly demonstrated in the longer school years they have for their children. He describes a New York City school that transplants this Asian model of schooling into an economically poor neighborhood and sees good results.

Gladwell concludes with an epilogue that applies his theories about experience, opportunity and cultural legacy to his own family, explaining the conditions that allow his grandparents and mother to succeed in Jamaica.

Outliers: The Story of Success from BookRags. (c)2022 BookRags, Inc. All rights reserved.