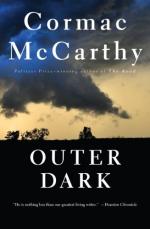 Cormac McCarthy
This Study Guide consists of approximately 31 pages of chapter summaries, quotes, character analysis, themes, and more - everything you need to sharpen your knowledge of Outer Dark.

This detailed literature summary also contains Topics for Discussion and a Free Quiz on Outer Dark by Cormac McCarthy.

Rinthy Holme has a baby boy. She and her brother, Culla, live in a rustic cabin in the woods in Appalachia. When Rinthy goes into labor, she pleads with Culla to go get a midwife to help her. He refuses because the midwife might tell others about the baby. Culla reluctantly helps Rinthy when she gives birth. He takes the healthy baby boy to the woods and leaves it for dead. Rinthy asks for the baby but is told by Culla that the baby was sickly and died. A tinker (vendor) who had stopped by the Holme cabin earlier finds the baby and brings it to a nurse in a nearby town.

As Rinthy begins to recover, she asks about the baby. She wants to visit its grave and bring it flowers. Culla had created a false grave in the nearby woods and brings Rinthy there. She places flowers on the grave and digs in the grave because she wants to see her baby. Rinthy digs in several places and finds that there is no baby. She confronts her brother. He finally tells Rinthy that the baby did not die but that he gave it to the tinker, which of course was also a lie.

Rinthy still very weak and recovering from childbirth. She realizes one day that Culla has abandoned her and is not coming back. She finally gains enough strength to leave. She gathers her meager belongings and sets out on a quest to find her baby. Rinthy walks for miles and miles through woods and from one small town to another. She asks every person she meets up with if they have seen the tinker. Rinthy tells the people that the tinker has something that belongs to her and she needs to get it back. She is met with much skepticism when she is asked what the tinker looks like but she does not know.

Rinthy is relentless and never loses sight of her goal. Her love for the child grows as she hunts the tinker down. However, Rinthy is a sympathetic person and is offered help in the form of meals, places to stay and even transportation in one case. She also makes her way by working and earning enough wages to keep her going. Rinthy's breasts are sore and leaking milk. She sees a doctor and feels renewed when he tells her that her breasts would have dried up if her baby had died. She takes this as confirmation that her baby is alive.

At the same time Rinthy is searching for her baby, her brother Culla is searching for her. When he had returned to their cabin, he had seen that she had left. Worried about her, he sets off on his quest to find her. In this same rugged area, Culla walks for miles and miles, picking up work and asking about for his sister. He runs into some tough situations. In one town he is chased by armed men. Even though he sustains some superficial buckshot wounds, he is able to allude them. A group of outlaws force him at gunpoint to trade his good boots for a worn-out pair. In another instance, he is found guilty of trespassing and serves ten days labor for the judge. Culla then is blamed for the death of a young pig drover. The other drovers wrongly accuse him of stampeding the herd, causing the young drover and some of the herd to go over a cliff to their deaths. The drovers agree to hang him, but Culla is able to escape by jumping off the cliff to the river below.

Rinthy finally locates the tinker and confronts him about her baby. At first the tinker denies any knowledge of the baby but eventually leads Rinthy to his cabin. The baby is not there and Rinthy begs the tinker to take her there the next day. The tinker questions Rinthy about the baby and accuses her of abandoning it in the first place. She explains that her brother told her he sold it to the tinker. Rinthy finally confesses that the baby is the biological product of her and her brother. The tinker it disgusted with her and leaves, warning her not to follow or he will kill her.

There is an underlying theme to the story of the sister and brother. There are shadowy groups of ruffians and murderers who are hanging people and digging up graves. In his travels, Culla has encountered some of these outlaws. On separate occasions, both Rinthy and Culla encounter men hanging from trees. These aspect of the story places an eerie pallor over the story's ambiance.

The tinker, feeling guilty, is taking the baby back to Rinthy, but encounters the murderous group. He tells the bearded man the origin of the baby. The tinker is hung and the outlaws torture the baby. Culla comes upon them and finds the baby burned, with only one eye. The head outlaw cuts the baby's throat and hands the baby to Culla. Later, Rinthy comes across the campfire and sees bones and a small ribcage. She does not know what to make of it and falls to sleep by the fire.

Culla is not murdered by the ruffians. He is allowed to live and wander about the now dark and eerie countryside in search of a peace he is not destined to find.

The story is a parable about innocence and goodness (Rinthy) versus selfishness and evil (Culla). The ominous Bearded Man represents an unforgiving society judging harshly the weakest and most innocent among it. The blind man at the end who tells the restless, guilty soul of Culla to pray represents Blind Faith. Though the sin of incest is reviled by society represented by the murder of the baby, it does not prevent love and peace to prevail in the innocent—Rinthy is at peace when she finds the burned remnants of her baby.

More summaries and resources for teaching or studying Outer Dark.