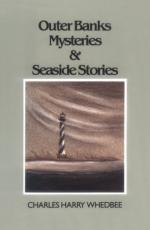 Charles Harry Whedbee
This Study Guide consists of approximately 25 pages of chapter summaries, quotes, character analysis, themes, and more - everything you need to sharpen your knowledge of Outer Banks Mysteries and Seaside Stories.

The dram tree is a hollow tree growing in Edenton harbor. For good luck, every ship that enters the harbor leaves a bottle of rum in the tree, and every ship leaving the harbor takes some rum from it.

Bucca the Bullappears in 7. The Legend of Old Buck

Bucca is a bull possessed by the spirit of Saint George's dragon. He watches over the children of Hatteras Island, and makes sure that the good ones get Christmas presents.

The Golden Drum of Bonnie Charlieappears in 10. Rodanthe's Drum of Old Christmas

This drum is known by many names, but it originated at a battle between England and Scotland. It is now in North Carolina, and is only played on January 6.

Old Christmasappears in 7. The Legend of Old Buck, & 10. Rodanthe's Drum of Old Chri

Old Christmas is on January 6, and many people of...