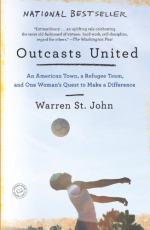 Warren St. John
This Study Guide consists of approximately 39 pages of chapter summaries, quotes, character analysis, themes, and more - everything you need to sharpen your knowledge of Outcasts United.

Luma al-Muflehs was born into a life of privilege in Amman, Jordan, which put her into a very small minority in that country. The vast majority of the people were poor and oppressed. The youth of Jordan had no hope for a bright future. Luma was fortunate; she was sent to an elite school that King Hussein’s children attended. Her family decided to send her to the U.S. to attend college. Her parents, especially her father Hassan had high hopes for her to return as an education young woman who would return to Jordan’s high society, becoming a wife and mother as was expected.

Although Luma had a shy and retiring personality like her father, there was an independent streak within her that innately told her that women weren’t less important than men. Her time in America confirmed that sentiment; she reveled in the freedom and opportunities that America gave her.

When she was a schoolgirl, Luma loved to play soccer with the young men in her neighborhood. Her grandmother didn’t approve – soccer wasn’t for little girls. Although she and her beloved grandmother didn’t agree about sports, they shared the same compassion for the poor. Her grandmother would never turn away a beggar who came to her door without giving him food or money. Luma inherited that feeling of helping the underprivileged, and it would prove to play a big role in her life.

After graduating from her American college, Luma made a big decision. She could not picture herself back in Jordan wearing a burka and unable to drive a car. She had four years of freedom and wasn’t about to give it up. The news did not sit well with her parents, especially Hassan. He had done so much for her and now she was shaming him. He warned her that he would cut off funds and contact with the family if she insisted on staying in America. Freedom was more important to Luma than anything else; she stayed in America.

Luma was cut off from her family and from support money. She had no work permit and was literally an undocumented immigrant. She had to take menial jobs to get her by. She settled in a small town in Georgia named Clarkson. She observed the sons of refugee families playing games of pick-up soccer in the streets. It came to her that she could organize teams and coach these kids. It would give them a team to play for and a purpose in their young troubled lives. She got help from the YMCA and formed three teams of differing age groups but they all had the same name --- the Fugees… for refugees. She learned during the ups and downs of coaching three teams of refugees that she needed them as much as they needed her.

More summaries and resources for teaching or studying Outcasts United.