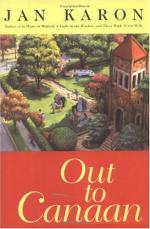 Out to Canaan Summary & Study Guide

Jan Karon
This Study Guide consists of approximately 31 pages of chapter summaries, quotes, character analysis, themes, and more - everything you need to sharpen your knowledge of Out to Canaan.

Out to Canaan Summary & Study Guide includes comprehensive information and analysis to help you understand the book. This study guide contains the following sections:

This detailed literature summary also contains Topics for Discussion on Out to Canaan by Jan Karon.

Out to Canaan is the third book in Jan Karon's Mitford series. In this novel, Father Tim has been married for two years to his neighbor, Cynthia. His house is overflowing with family and friends, including Harley, who has moved into the apartment in the basement of the rectory. On top of this, Father Tim has his regular church duties, is trying to help Esther Cunningham win a ninth term as mayor, and is struggling to do right by Miss Sadie by making sure the sale of her ancestral home, Fernbank, is handled with care. Out to Canaan is novel that is supposed to be taking the beloved character of Father Tim to retirement, but makes it clear that a good man's works are never done.

Father Tim faces spring with the unpleasant duty of having to tell his practically adopted son that he cannot spend the summer at Meadowgate as he had hoped. Instead, Father Tim must find him a job in Mitford while also helping his wife hostess a tea at their home, make a decision about the decaying roof at Fernbank, and prepare for his retirement in a year and a half. At the same time, Father Tim learns that Mack Stroupe, a neighbor and hot dog vendor, is running against Esther Cunningham for mayor.

Father Tim brings Dooley home and instantly discovers that his fourteen-year-old son is now interested in both cars and girls. Now Father Tim finds himself in the awkward position of talking to the boy about sex while putting off the inevitable driving lessons. While trying to decide what to do about that, Lace, a girl from the Creek that Father Tim has placed with a local family, brings him Harley, her friend who is suffering from a bleeding ulcer. Father Tim gives Harley a place to stay in the rectory, adding to the already overflowing rooms at the rectory.

Miss Sadie left Father Tim and his church Fernbank when she died, leaving the church with the decision over whether or not to shell out the money for the house's upkeep or to sell it as is. When a real estate company out of Florida, Miami Development, offers to buy the house, the church is ecstatic. However, Father Tim is hesitant to watch Miss Sadie's beloved Fernbank turned into a spa. Father Tim puts off the sale as long as he can, demanding thirty days to think the offer over. At the last minute, Father Tim's friend, Andrew, calls from Italy and makes an offer on Fernbank in which he is willing to pay the asking price, more than a hundred thousand dollars more than Miami Development is offering.

As the mayoral campaign becomes heated, causing the mayor to call Father Tim many times for ideas on how to promote herself as mayor, Father Tim announces his impending retirement to his congregation. Many take this announcement badly, avoiding Father Tim on the street or crying at the sight of him. Father Tim begins to have second thoughts, but he has already promised his devoted wife he will retire and dedicate his time to her.

Winnie Ivy, owner of Sweet Stuff Bakery, decides to sell her bakery and move to Tennessee with her brother, Joe. However, by the time Winnie gets an offer on the bakery, she has already decided that she does not want to move. When the buyer offers to allow Winnie to remain at the bakery and run it for them, Winnie agrees. However, by this time Father Tim has figured out that Edith Mallory, an old enemy, is behind the company making the offer. Father Tim helps Winnie back out of the deal and keep her business intact.

Father Tim keeps his mouth shut regarding the fact that Edith Mallory is also behind Mack Stroupe's bid at mayor and nearly regrets it when the election ends in a tie, forcing a coin toss to make the choice. However, it all ends well when Esther wins. It seems everything is falling into place for Father Tim, including finding one of Pauline Barlowe's missing three children. However, alcohol is still a demon for poor Pauline, as well as her new beau Buck Leeper, giving Father Tim something else to focus on even as he finds peace and contentment as Christmas Eve arrives in Mitford.

More summaries and resources for teaching or studying Out to Canaan.

Out to Canaan from BookRags. (c)2022 BookRags, Inc. All rights reserved.