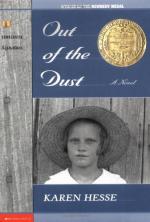 Out of the Dust Overview

Karen Hesse
This Study Guide consists of approximately 65 pages of chapter summaries, quotes, character analysis, themes, and more - everything you need to sharpen your knowledge of Out of the Dust.

Out of the Dust Summary & Study Guide Description

Out of the Dust Summary & Study Guide includes comprehensive information and analysis to help you understand the book. This study guide contains the following sections:

This detailed literature summary also contains Related Titles and a Free Quiz on Out of the Dust by Karen Hesse.

Out of the Dust is Billie Jo Kelby's first person narration of her life near Joyce City, Oklahoma from January 1934 though December 1935 when she was fourteen and fifteen years old.

This part of the Oklahoma Panhandle, near the Oklahoma border, was among the hardest hit areas by dust storms and tornadoes, scorching the earth and causing terrific hardship for the people and animals that persisted to inhabit the land. Billie Jo's father is a wheat farmer, and although his crop has failed year after year, he believes that the rains will surely come and fecundity will be restored to the land.

He is not so much an optimist in his faith that the rains will come as he is a part of the land, which has endured so long and with periods of great fecundity, that it is inconceivable to him that restoration will not occur. Billie Jo is an observer and interpreter, as well as participant, in the horrors that confront her family. She witnesses death by dust, death by fire, starvation, abandonment, mutilation, and other events that would break the spirit of most people. She recounts these tragedies so objectively, poetically, and philosophically that readers may wonder about her emotions as a narrator and human being; but the reality is that farmers trapped in the Dust Bowl during the height of the Depression had no options, and they either accepted and dealt with their situation, or they were reduced to broken, sometimes insane people. Billie Jo is a survivor who relies on a balanced perspective of her capabilities, limitations, and opportunities.

Because Out of the Dust is written as if it is journal entries by a fourteenyear-old girl, it seems deceptively simple, and in fact, the story can be understood and enjoyed by very young readers. It is, however, a sophisticated work of literature that provides the greatest reward for readers who are versed in American history of the 1930s; Freudian psychology; poetic forms and techniques; other literature about the Depression Era; myth; and symbolism.

More summaries and resources for teaching or studying Out of the Dust.

Out of the Dust from BookRags. (c)2022 BookRags, Inc. All rights reserved.