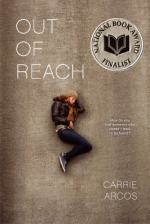 Out of Reach Summary & Study Guide

Carrie Arcos
This Study Guide consists of approximately 46 pages of chapter summaries, quotes, character analysis, themes, and more - everything you need to sharpen your knowledge of Out of Reach.

Out of Reach Summary & Study Guide includes comprehensive information and analysis to help you understand the book. This study guide contains the following sections:

This detailed literature summary also contains Quotes and a Free Quiz on Out of Reach by Carrie Arcos.

When Rachel's brother, Micah, leaves home after a failed stint at a drug rehabilitation center, Rachel thinks that she is better off without him. One day, she receivers an anonymous e-mail telling her that Micah is not far away and is in trouble.

Rachel does nothing for two weeks but feelings of guilt finally make her take action. She finally decides to look for Micah and enlists Tyler, Micah's best friend and band member, to help her.

Using her friend, Michelle, as a cover, Rachel and Tyler drive to Ocean Beach to find Micah. They ask people whether they have seen Micah, but no one has. Realizing that time on the meter is running out, they decide to return to the car, only to discover that someone has stolen it.

After reporting the theft, they decide to continue their search. Tyler contacts a surfer friend, Dillon, to help them. He has seen Micah recently, but doesn't know where he is now. He agrees to help them with their search and drives them to Mission Beach. He has to pick up his surf board, so they stop by a shop owned by two brothers. The brothers have also seen Micah and have loaned him money. They also tell Rachel that Micah is now selling drugs. She finds out that Tyler also knew about this. The news angers her.

Dillon unearths a girl Micah has been living with. Her name is Finn. The trio go to her house and discover that she is the one who wrote the mysterious e-mail. Micah, however, is no longer there. Rachel looks in his room and discovers some things that he left behind, In addition to one of her books, "The Hobbit" she finds a phone number in his jean pocket. She takes it with her, but doesn't tell anyone about it.

After leaving Finn's house, she, Tyler, and Dillion go to a beach party. Dillon gets drunk, and afterwards, Tyler has to drive. They stop to get something to drink, and while he's in the convenient store, Rachel calls the number. Someone picks up, but hangs up when she asks whether it's Micah. She calls back, gets voicemail, and then someone hangs up before she has the chance to leave a message. When Tyler returns, she doesn't tell him about the phone call.

Rachel is upset by the result of the call and almost causes Tyler to have an accident. The jolt of the car wakes up Dillion. He checks his phone and tells them that a meeting with a drug dealer that he's set up is on. The meeting never happens, though, because another group comes and beat up the drug dealer while the trio watch. After calling 911, Rachel and Tyler take Dillon home and as they can't get anyone to pick them up and there are no buses for hours, they spend the night at a church.

During their stay, Rachel has a revelation and accepts the fact that Micah needs to go on his journey alone.

Once there, both she and Tyler admit that they are attracted to each other and Rachel writes Micah and e-mail telling him that things are okay between the two of them and she's willing to let him go and accept that he needs to do what he needs to do on his own.

More summaries and resources for teaching or studying Out of Reach.

Out of Reach from BookRags. (c)2022 BookRags, Inc. All rights reserved.