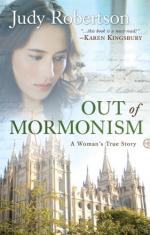 Out of Mormonism: A Woman's True Story Topics for Discussion

Judy Robertson
This Study Guide consists of approximately 28 pages of chapter summaries, quotes, character analysis, themes, and more - everything you need to sharpen your knowledge of Out of Mormonism.

What are some of the differences that Judy and Jim found between Mormonism and Christianity? What could have been reasons that Jim and Judy were drawn to the Mormon religion?

Why did Judy become depressed after she returned from Arizona? Why did Jim lose interest in the Mormon church after their summer in Mesa? Why were they reluctant to discuss their feelings and thoughts with each other?

What occurred during the ceremony in which Judy and Jim became worthy members of the Mormon church? What did Mormons have to wear next to their skin at all times? What were possible reasons that Mormons are told not to reveal to outsiders what goes on in the temples?

What experiences did Judy have that convinced her that they had followed the wrong religion? What had Jim read to change his mind? What reaction did Jim have...

More summaries and resources for teaching or studying Out of Mormonism: A Woman's True Story.

Out of Mormonism: A Woman's True Story from BookRags. (c)2023 BookRags, Inc. All rights reserved.