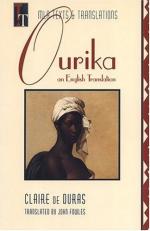 Claire de Duras
This Study Guide consists of approximately 37 pages of chapter summaries, quotes, character analysis, themes, and more - everything you need to sharpen your knowledge of Ourika.

This detailed literature summary also contains Topics for Discussion and a Free Quiz on Ourika: An English Translation by Claire de Duras.

Ourika by Claire de Duras is a fictional novel based on a true story about a young slave girl from Senegal who is raised and protected by a wealthy French family shortly before the French Revolution. Ourika does not realize her dependent status until she overhears her benefactress discussing it with her friend. She is stricken with despair upon realizing that, despite her intelligence and numerous talents, her race ensures that she will have no future, and this despair ultimately takes her life. Ourika recounts the heartrending tale of a young woman whose race combined with the superior education she has received causes her to feel "cut off from the entire human race" (p. 16).

The Introduction consists of two essays, by Joan DeJean and Margaret Waller respectively, about Claire de Duras and the significance of her decision to write about an educated black woman shortly after the French Revolution. In the Foreword by John Fowles, the translator talks about his love affair with books in general and particularly with Ourika. In the Introduction to Ourika, a young Parisian doctor tends a young, sick black nun in the convent at Faubourg Saint Jacques, who suffers from a prolonged melancholia. Since the doctor insists that she must cure the past to save the nun's life, the nun shares the sad story of her life after becoming better acquainted with the doctor. Chevalier rescued Ourika from a slaver in Senegal when she was two years old and gave her to his aunt, Mme. de B, when he returned to France. Mme. de B raised Ourika like a daughter, providing her with what was considered a girl's perfect education, and Ourika's only friend was Mme. de B's grandson, Charles, who was about the same age as she was. Ourika was treated kindly, well-educated and attractive, and she excelled at dancing, singing and drawing. Her life was peaceful until the day she overheard a conversation between Mme. de B and her friend, the marquise, which made her realize her dependent, despised status in society due to the color of her skin; after this, Ourika was stricken with despair that negatively impacted her health. The only distraction from her self-pity was when Charles left to travel abroad.

When the Revolution took a serious turn, it gave Ourika a wisp of hope that she might find her true place when the chaos settled, but she was soon disabused as she could not stand the great present suffering for the potential of her own small future happiness. Her interest in the idea of emancipating the Negroes only made her ashamed to belong to a race of barbarous murderers after the massacres at Santo Domingo. After Mme. de B's friends hid or traveled abroad to avoid persecution, an announcement came that the property of those who had traveled abroad would be confiscated, so Mme. de B summoned Charles to come home. Mme. de B, Charles, Ourika and an old priest retired to the country in Saint-Germain. The time spent at Saint-Germain was the happiest in Ourika's life after the end of her childhood delusions. Ourika felt needed by Mme. de B and was proud to be trusted by Charles. She was displeased when Mme. de B's friends returned after the Terror ended, as they scrutinized her disdainfully for being taken into Mme. de B's confidence.

After Charles fell in love with Mlle. de Themines, Ourika was stricken with a despair that led to a desperate illness when he announced that he wanted the trust in his marriage to be exactly like the trust between him and Ourika. While Mme. de B attended Charles' wedding in Paris, Ourika was left alone at Saint-Germain and imagined dying abandoned. She recovered but grieved the loss of her friend, despite his frequent visits after his marriage. Ourika and Mme. de B returned to Paris when Anais became pregnant, but the birth of Charles' son increased Ourika's jealousy and despair with the knowledge that she would never be a wife or mother. While Ourika prayed to die, the marquise visited her to learn her sorrows, but after she insisted that Ourika's grief was the result of a secret, doomed passion for Charles, Ourika's despair increased as she wondered if the marquise was right. Her health worsened, and she nearly died. After the parish priest heard Ourika's final confession, he assured her that she was not guilty of improperly loving Charles, but she has sinned by being unhappy and not recognizing God's purpose for her life. Encouraged by the priest, Ourika decided to become a nun with Mme. de B's sad approval and against Charles' pleading. After the nun finishes her story, the doctor continues to visit, but her remedies prove vain when Ourika dies at the end of October.

More summaries and resources for teaching or studying Ourika: An English Translation.