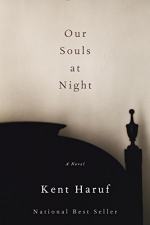 Related Topics
Plainsong
The Tie That Binds: A Novel
Where You Once Belonged: A Novel
Eventide
Benediction

Kent Haruf
This Study Guide consists of approximately 39 pages of chapter summaries, quotes, character analysis, themes, and more - everything you need to sharpen your knowledge of Our Souls at Night.

Our Souls at Night Summary & Study Guide includes comprehensive information and analysis to help you understand the book. This study guide contains the following sections:

This detailed literature summary also contains Quotes and a Free Quiz on Our Souls at Night by Kent Haruf.

Kent Haruf’s novel, Our Souls at Night, tells the tale of the unlikely love found when Addie Moore proposes that her neighbor, Louis Waters, sleeps in the same bed as her because the nights are lonely. In small town Holt County. Their arrangement immediately comes under fire from the other elderly folks. Despite their words, the two continue because they believe they have finally found some light after the death of their spouses.

Each night, Louis and Addie recount parts of their past to each other and become closer for it. Louis tells Addie how his wife, Diane, lost the will to live as she wasted away from terminal cancer. Addie tells Louis about her eventually cold relationship with her husband, Carl, who died in church one Sunday morning. After relating the parts of their lives that are common knowledge, they begin to delve into the deeper, more painful memories that they have.

For instance, Louis tells Addie about his affair with a fellow school teacher named Tamara and how he left Diane and his young daughter to live with Tamara and her daughter. After ruining Tamara’s marriage, he returned to his family. Addie then recounts the story of her daughter, Connie, who, while playing with her brother in the yard, ran out into the street. A car hit her, and Connie died in the hospital a few hours later. These events affect the way that each character behaves with the other and how each thinks about their own self. Louis’s affair causes him to be brutally hard on himself, while Connie’s death ruined Gene, Addie’s son, and Carl’s relationship. It put Addie in the middle of their resentment.

One day, Gene drops his son off at Addie’s house asking that she look after the boy because Gene’s wife left him. That summer, Jamie, Addie’s grandson, stays with her in the house. He cries every night until Addie takes him into her bed to comfort him. Louis, who meets the boy, decides to get him a dog who they later call Bonnie. With Bonnie, Jamie feels more comfortable and begins to settle in for the summer. To help Jamie enjoy his summer and also to be with each other, Addie and Louis take him to a softball game, the Rocky Mountains to go camping, and restaurants.

Eventually, Jamie meets Louis and Addie’s elderly neighbor Ruth who quickly takes to the boy. Later in the week, after dinner with Louis, Addie, and Jamie at Ruth’s house, Ruth goes to the bank and collapses. She dies before she hits the floor. Deciding not to tell Jamie about Ruth’s death, the couple continues with their summer. A weekend visit from Jamie’s father, Gene, destroys Addie and Louis’s peace. Gene denounces their relationship as something disgusting and tells them to stop immediately. Louis leaves in a fury and Addie tells Gene he should be ashamed of himself. That weekend, Gene takes Jamie home with him because Jamie’s mother agreed to come back to the house.

When Addie tries to call Jamie, Gene refuses to let her speak to him because she continues her relationship with Louis. Addie and Louis have one more, sad night then they stop seeing each other. That fall, Addie breaks her hip and goes to live in a retirement home near Gene and Jamie. Destroyed, Louis solemnly continues his routines around the house and in town until Addie calls him one day from her cell phone. Addie initiates the calls between them and they begin to talk regularly again. In this bittersweet manner, the novel ends.

More summaries and resources for teaching or studying Our Souls at Night.

Our Souls at Night from BookRags. (c)2022 BookRags, Inc. All rights reserved.