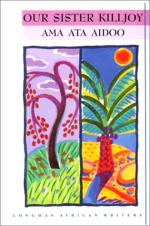 Ama Ata Aidoo
This Study Guide consists of approximately 33 pages of chapter summaries, quotes, character analysis, themes, and more - everything you need to sharpen your knowledge of Our Sister Killjoy.

This detailed literature summary also contains Quotes and a Free Quiz on Our Sister Killjoy by Ama Ata Aidoo.

The following version of this book was used to create the guide: Aidoo, Ama Ata. Our Sister Killjoy, or Reflections from a Black-Eyed Squint. NOK Publishers International Limited, 1979.

In Our Sister Killjoy, a novel using a combination of prose and poetry, Ama Ata Aidoo tells the story of Sissie, the novel’s Ghanaian protagonist, as she travels among countries in Europe, such as Germany and England. The novel begins with a short chapter titled “Into a Bad Dream,” in which Sissie is awarded with a scholarship to travel to Germany and work as a volunteer in a pine tree nursery. She flies from Ghana into Europe. The novel ends with Sissie, who is black, attracting attention and stares from children in the Frankfurt airport.

The next chapter, “The Plums,” details Sissie’s friendship with a young German housewife named Marija. Marija gives Sissie plums and other fruits from her garden, and they go on many walks with her young son Adolf. Marija makes a sexual advance towards Sissie. When Sissie leaves, Marija is distraught and begins crying.

In the third chapter, “From Our Sister Killjoy,” Sissie travels onwards to London, England, where she is shocked by the treatment and poverty of the city’s black people. Sissie becomes involved in an African Students’ Union, where they debate brain drain and whether to stay in Europe or return to their home countries. She is the only person advocating for them to all return to their home countries. The chapter includes a debate over the first heart transplant, which took place in South Africa by a white doctor operating on a dying white man and using a black man’s heart.

In the final chapter, “A Love Letter,” Sissie drafts a letter to a man identified only as My Precious Something, who she meets at an African Students’ Union meeting in London. She and the man have broken up, and Sissie in her letter describes her reasons for returning to Ghana. At the end of the novel, a flight attendant announces that they have crossed into the continent of Africa and Sissie looks down at the continent from the airplane.

More summaries and resources for teaching or studying Our Sister Killjoy.