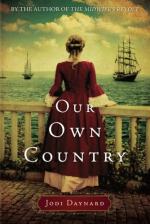 Our Own Country: A Novel Summary & Study Guide

Jodi Daynard
This Study Guide consists of approximately 62 pages of chapter summaries, quotes, character analysis, themes, and more - everything you need to sharpen your knowledge of Our Own Country.

Our Own Country: A Novel Summary & Study Guide Description

Our Own Country: A Novel Summary & Study Guide includes comprehensive information and analysis to help you understand the book. This study guide contains the following sections:

This detailed literature summary also contains Quotes and a Free Quiz on Our Own Country: A Novel by Jodi Daynard.

The following version of this book was used to create this study guide: Daynard, Jodi. Our Own Country. Lake Union Publishing, Seattle, 2016. Kindle AZW file.

Eliza Boylston is a woman born into a wealthy, privileged family. From an early age, she lives a charmed life with every advantage her family's money and social standing can provide. Her mother is not a warm, caring person, and Eliza often seeks comfort in the company of a family slave, Cassie, and Cassie' son, Toby. When the family is in financial difficulty, Mr. Boylston sells Toby which leaves Eliza heartbroken. When Eliza is a teenager, her younger sister, Maria, dies. From that moment, Eliza is aware that the money and social standing cannot save and protect her from everything. Eliza endures additional hardships and horrible situations over the next few years of her life. When George Inman begins to court Eliza, she is thrilled. By the time he proposes, she has learned he is a shallow, self-centered young man. She is horrified when he proposes in front of a large audience, and asks for time to consider it, though everyone knows this is her way of refusing his offer.

Eliza's father is a supporter of the English government but the American people as a whole are tired of the British rule. It becomes clear that a revolution is in their future and one night Eliza discovers that her brother, Jeb, is among a group of rebels who throw tea into the Boston harbor as a means of protesting the British laws. Eliza and her parents fear that Jeb will be arrested, but that never happens. Jeb soon falls in love with a girl named Elizabeth Lee. Eliza is scornful of Elizabeth, but she secretly begins to admire the girl who captured Jeb's heart. Elizabeth is indifferent about society's dictates, and she seems happy in ways Eliza cannot imagine. Jeb and Elizabeth marry and move to a farm and Jeb is killed in one of the earliest battles of the Revolutionary War.

With the war in full swing, Eliza's family lives in near-constant fear of attack or arrest. Goods and services are scarce and Eliza is thrilled to be invited to a party hosted by George Inman. He pretends to be sick but urges everyone to remain. One of his friends pretends an interest in Eliza, and then attacks and rapes her while George watches. Eliza withdraws completely after that, but no one other than Cassie even seems to notice. Eliza and her family move to Portsmouth where Eliza's maternal uncle opens his home to them. There, Eliza meets John Watkins for the first time. He is a light-skinned black man, though she does not immediately realize he is a slave. When she does make that discovery, she tries to ignore her growing attraction for him, and he does the same. Eventually, they are unable to ignore each other and their love grows. In a single sexual encounter, Eliza becomes pregnant and discovers that not all men are brutes like her rapist had been.

Eliza's goes to the country to remain with Elizabeth during the birth of her son, a boy she names Johnny. She has matured greatly by this time and becomes close to Elizabeth and remains true to her love for John, though she fears they will never be free to live together. The war and other circumstances change their lives dramatically and friends help arrange for John's release, along with Isaac, a boy who has become attached to Cassie. Eliza makes plans for their little family to move to the home and few acres she has inherited from her father. The property is in Barbados and there, Eliza, John, and Johnny settle in to carve out a new life for themselves along with Cassie, Isaac, and Mrs. Boylston.

More summaries and resources for teaching or studying Our Own Country: A Novel.

Our Own Country: A Novel from BookRags. (c)2022 BookRags, Inc. All rights reserved.