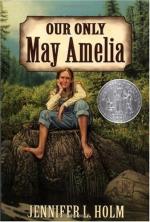 Our Only May Amelia Summary & Study Guide

Jennifer L. Holm
This Study Guide consists of approximately 22 pages of chapter summaries, quotes, character analysis, themes, and more - everything you need to sharpen your knowledge of Our Only May Amelia.

Our Only May Amelia Summary & Study Guide Description

Our Only May Amelia Summary & Study Guide includes comprehensive information and analysis to help you understand the book. This study guide contains the following sections:

This detailed literature summary also contains Topics for Discussion on Our Only May Amelia by Jennifer L. Holm.

Our Only May Amelia is a Newberry Award winning novel by writer Jennifer L. Holm. The novel is about a Finnish family that has settled on the Nasel River in Washington State. May Amelia is the only daughter in a family of eight children and the only girl among the Finnish families on the Nasel. For this reason, May Amelia tends to dress and play like a boy as well as cause the same amount, if not more, trouble than her brothers. Our Only May Amelia is a touching story of one girl's struggle to find where she belongs in her family, a story that many readers will find they can relate to.

May Amelia has seven brothers, all older than her. On her twelfth birthday it is Wilbert, her favorite brother, who brings her home after she decides to run away because of a squabble with her father over an impromptu trip to Armstrong's logging camp. May Amelia is convinced her father does not love her because he is constantly lamenting her behavior. Wilbert convinces her to come home. At home, May Amelia finds her favorite aunts and uncle waiting for her. One aunt gives May Amelia a store bought doll, the fanciest gift she has ever received.

When Aunt Alice returns to Astoria, May Amelia is allowed to go along with three of her brothers in order to do some shopping for her pregnant mother. At Aunt Alice's, May Amelia admires her aunt's fancy belongings and decadent food. May Amelia finds the city exciting as well, especially the unique mix of people she sees on the streets. When May Amelia returns home, there is excitement when one of the sheep breaks its back. May Amelia's brother, Isaiah, has named all the sheep after their neighbors and everyone mistakes his emergency call for the sheep as one for a neighbor's mother.

A short time later, Kaarlo, May Amelia's cousin who has been raised as her brother for the last seven years, learns that his family has died in an epidemic. Kaarlo runs away for a short time, but May Amelia talks him into coming home despite the fact that they have never really gotten along. Not long after Kaarlo returns to the family, Grandmother Patience comes to live with them. Grandmother Patience is a cruel, impatient woman who has a particular dislike for May Amelia. Grandmother Patience hits May Amelia when she believes she is being improper and one night breaks her doll for refusing to give in to her unfair commands.

May Amelia runs away to Astoria and moves in with her aunt and uncle. May Amelia stays in the city all winter, making friends with a girl. May Amelia even allows her Aunt Alice to make her a dress so she can attend a dance. However, May Amelia is bored by the dance and sneaks away to spend the evening with another friend. Not long afterward, May Amelia's father sends word that Grandmother Patience has died from scarlet fever and Wendell is suffering from the illness as well. May Amelia finally agrees to return home, where she nurses Isaiah back to health.

When summer finally comes again, May Amelia has settled back in with her family. One afternoon, May Amelia plans to go swimming with Wilbert. Wilbert returns to the house to retrieve something, so May Amelia goes into the water with Bosie. When they are in the middle of the river, Wilbert comes running, screaming that the logs are coming. May Amelia freezes for a moment. However, Wilbert is able to get May Amelia and Bosie out of the water just in time. May Amelia thinks she will get into trouble, but instead her father, brothers, and mother are so relieved she is okay they smother her with affection.

More summaries and resources for teaching or studying Our Only May Amelia.

Our Only May Amelia from BookRags. (c)2022 BookRags, Inc. All rights reserved.