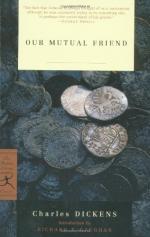 Charles Dickens
This Study Guide consists of approximately 37 pages of chapter summaries, quotes, character analysis, themes, and more - everything you need to sharpen your knowledge of Our Mutual Friend.

This detailed literature summary also contains Topics for Discussion and a Free Quiz on Our Mutual Friend by Charles Dickens.

Our Mutual Friend is a fiction novel by Charles Dickens. It begins with a man, Jesse Hexam, who along with his daughter, Lizzie, finds a body in the Thames River. Lizzie is scared but her father warns her to be brave. They meet a man on the river named Rogue Riderhood but Hexam is not kind to him. The body is identified as a man named John Harmon, who was coming home to claim his inheritance. He was supposed to inherit his father's estate, as long as he married Bella Wilfer. A man named Julius Handford comes to look at the body but later disappears. After his death, two servants Noddy and Henrietta Boffin inherit the Bower estate. A mysterious man named John Rokesmith applies to be their secretary. Noddy Boffin hires a man named Silas Wegg to teach him to read but Wegg is only concerned with finding a way to make a profit off of their association. Two men, a school teacher named Bradley Headstone and a lawyer named Eugene Wrayburn, both fall in love with Lizzie Hexam. However, Headstone's affection scares Lizzie and she flees the area. Bella Wilfer, the girl who was supposed to marry John Hexam, is taken in by the Boffins and learns to like the rich life.

Silas Wegg finds a will that gives the Bower estate to the government, and plans to blackmail Noddy Boffin with this. However, there is a later will that does leave the estate to the Boffins, which Noddy had hid so as not to give John Harmon a bad name. When Wegg tries to get money off of Boffin and order him around, Wegg is thrown out and humiliated. John Rokesmith is fired by Noddy Boffin for his love of Bella. Boffin has begun to get more miserly, but this is all part of a charade to show Bella Wilfer that money is not everything. Bella marries Rokesmith because she loves him, and he eventually reveals that he is John Harmon. Bella's father, Mr. Wilfer, is relieved his daughter has learned her lesson and married for love. The Harmons and the Boffins will live together at the Bower. Bradley Headstone is very jealous of Eugene Wrayburn over Lizzie Hexam and eventually attacks him, leaving him for dead. However, Lizzie finds Eugene and nurses him back to health. Bradley drowns while fighting with Rogue Riderhood, who knows Headstone attacked Wrayburn. Riderhood had tried to blackmail Headstone. Lizzie and Eugene get married, and Eugene decides not to finger Headstone as the man who attacked him. The couple lives happily despite their differences in social status.