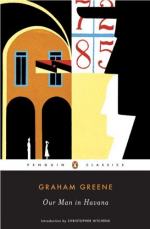 Graham Greene
This Study Guide consists of approximately 43 pages of chapter summaries, quotes, character analysis, themes, and more - everything you need to sharpen your knowledge of Our Man in Havana.

Our Man in Havana Summary & Study Guide includes comprehensive information and analysis to help you understand the book. This study guide contains the following sections:

This detailed literature summary also contains Topics for Discussion and a Free Quiz on Our Man in Havana by Graham Greene.

Jim Wormold is a British vacuum salesman in Cuba. His wife has left him and his business is not doing well. The only positive thing in his life is his young daughter, Milly. He wants to give her everything she wants but as his business declines this becomes continually more difficult. When an odd stranger confronts him in the restroom of a bar and recruits him to be a spy for the British Secret Service, Wormold sees an opportunity to provide for his daughter. Wormold is the most unlikely of spies as he knows nothing about intelligence gathering or how to run a covert operation. But he does not let this stop him from writing reports. He proceeds to send in reports to London that he fabricates completely. He then begins to recruit imaginary agents and collect their salaries. As his reports become more exciting, London becomes very interested.

Wormold sends in a report detailing a large military structure being built in the mountains around Havana. When the head office hears this, they take it very seriously and send him a staff. His new secretary is Beatrice, a well trained and serious secretary. As she starts to go over Wormold's files, he has to stay one step ahead to keep up his many lies. The novel is largely a satire and has many hilarious scenes. Things start to come to a head when mysterious agents from another unknown government go after Wormold and his phantom agents. One man who meets the description of his pilot is killed in a mysterious car accident. Then an engineer who unwittingly has been playing a role as Wormold's engineering expert is shot at in public. Wormold now knows someone is trying to kill him.

Wormold discovers someone is going to try and kill him at a business luncheon. He manages to avoid death when he discovers a British agent named Carter is the man sent to kill him. Wormold is confused and does not know what to do. Then Carter kills Wormold's best friend Dr. Hasselbacher and Wormold decides he has to retaliate. He gets the notorious police officer Captain Segura drunk and takes his gun. He then takes Carter out and kills him. After this, Wormold's world starts to spirals out of control and he reveals his secret to Beatrice. To his surprise she understands and even falls in love with him. When Wormold finally faces his bosses at the Secret Service he is shocked to learn that they are not punishing him, they are in fact giving him a position as a trainer and awarding him the Order of the British Empire. Wormold has managed to provide for this daughter Milly and keep himself out of prison. At the end of the novel, Beatrice has left her job, started a new relationship with Wormold and they are now living in London with Milly.

More summaries and resources for teaching or studying Our Man in Havana.

Our Man in Havana from BookRags. (c)2022 BookRags, Inc. All rights reserved.