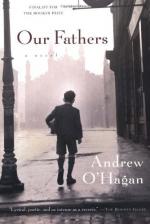 Andrew O'Hagan
This Study Guide consists of approximately 21 pages of chapter summaries, quotes, character analysis, themes, and more - everything you need to sharpen your knowledge of Our Fathers.

Our Fathers Summary & Study Guide includes comprehensive information and analysis to help you understand the book. This study guide contains the following sections:

This detailed literature summary also contains Topics for Discussion and a Free Quiz on Our Fathers by Andrew O'Hagan.

Our Fathers tells the story of a young Scottish boy's journey from a tumultuous childhood to his years of searching for contentment and identity in adulthood. The reader is ushered through three generations of dysfunction that shape the life of each character.

Young Jamie Bawn is an intelligent boy, full of curiosity. He enjoys books and learning, but is discouraged from such interests by his raging, alcoholic father, Robert Bawn, who is angry that Jamie isn't rough or athletic. Robert continually compares Jamie to his own father, Hugh Bawn, a successful businessman and builder, whom Robert criticizes constantly. Jamie's mother Alice loves her son, but always reminds him that he is different from other children because of his interest in the way things are engineered and operate. Despite her husband's violence toward her and his verbal abuse towards herself and Jamie, Alice continually runs back into Robert's arms.

Moving from place to place at the whim of his father, Jamie appears to be exempt from any sign of a normal childhood. The only stability he knows is exhibited in visits to Granda Hugh and Gran Margie's home. Even though Jamie's father has severed ties with his parents, Hugh and Margie make Jamie a priority in their lives and send for him on several occasions. It is during these visits that Jamie feels safe and at home.

Finally, reaching a breaking point and tired of being trapped in a mold-infested home with a drunken father, Jamie feigns paralysis in his legs in order to move in with Granda Hugh and Gran Margie. Alice knows the move is what's best for her son and doesn't try to convince him otherwise.

Once he is settled in with Hugh and Margie, Jamie's legs mysteriously regain their strength and he becomes a young prodigy of the successful Hugh Bawn. Hugh is a popular man and leader of a successful building program throughout post-war Scotland. He teaches Jamie everything there is to know about physics, architecture, business and life. When he is ready for university, Jamie bids farewell to his grandparents and journeys to England, where he begins a new life.

A span of time is passed over after the scene where Jamie leaves for England, and picks up with his return to Scotland to visit his dying mentor, Granda Hugh. It is this final journey home that unravels everything he ever thought to be secure, while at the same time knitting relationships back together and making sense of what never did.

Upon his return, Jamie discovers that the buildings Hugh constructed and became famous for are being torn down, and a new generation of housing and modernism is taking shape. Hugh is no longer the strong man he used to be, but lies wasting away in a bed, sometimes lashing out with a harsh temper. Gran Margie has become a bundle of nerves and she is distraught that Hugh is being investigated for misappropriation of building funds.

Despite Hugh's severe mood swings, he and Jamie are able to share some good moments, including a random trip to the town pubs with Hugh in a wheelchair and a side trip to a cemetery that prompts both men to examine their lives.

While back in Scotland, Jamie also decides to pay a visit to his mother Alice, though he has mixed feelings. As much as he loves her, he still feels that she abandoned him in his youthbut is happy to learn that she had the courage to leave his father and is now happily remarried to a very gentle man. Jamie looks her up and surprises her at a local club, where he feels relief and contentment from their visit, after seeing how beautiful she looks and how healthy she is. Even her new husband Bob is a likable man.

It is during this time that Jamie begins to miss his girlfriend Karen, back home in England, and contemplates fatherhood himself. Karen has always wanted a baby, but Jamie has objected each time, struggling with his view on fathers and himself. For the first time in his life, he believes he could be a good father.

The story begins its close with Granda Hugh passing away the day after Christmas. Jamie helps an emotionally distraught Margie with arrangements and worries about how she will manage without Hugh. On the day of the funeral, Jamie walks to the front of the church to read a scripture and glances out into the crowd. Looking straight at him from the back row is a stranger Jamie finally recognizes as his father Robert. Jamie's last glimpse of his father was many years back as a teenager, when Granda Hugh had taken him to visit Robert in a psychiatric ward. Hugh waited outside, and Jamie went in with good intentions, only to be verbally assaulted by a very sick, very bitter man. At that point, Jamie resolved never to see him again, although the recent turn of events seems to somehow soften things.

Robert ducks out immediately after the funeral and a few days later Jamie sets out to find him in a nearby town, where he is working as a taxi driver. He is shocked. It is hard to believe his father is sober, cleaned up, and working. He is a lot older now and resembles Hugh. Jamie doesn't excuse Robert for the horrendous past, but over a couple of visits, they make amends, and Robert invites him to an Alcoholics Convention to hear him speak.

The story closes with Jamie helping Gran sort through a lifetime of personal effects and the discovery of framed pictures that were special to Hugh. Upon turning one over, Jamie discovers his own handwriting from his early years, scrawled across the back of a print that Hugh saved. "There are ruined buildings in the world," it says, "but no ruined stones."

More summaries and resources for teaching or studying Our Fathers.

Our Fathers from BookRags. (c)2022 BookRags, Inc. All rights reserved.