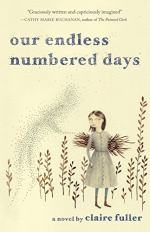 Claire Fuller
This Study Guide consists of approximately 57 pages of chapter summaries, quotes, character analysis, themes, and more - everything you need to sharpen your knowledge of Our Endless Numbered Days.

This detailed literature summary also contains Quotes and a Free Quiz on Our Endless Numbered Days by Claire Fuller.

The following version of this book was used to create this study guide: Fuller, Claire. Tin House Books, 2015. First Edition.

Our Endless Numbered Days tells the story of how Peggy Hillcoat was kidnapped by her father James, deceived into believing the world had ended, and forced to live in the wilderness for most of her adolescence. Fuller's novel contains two narrative threads, both narrated in the first person by Peggy. In the first strand, Peggy speaks as a 17-year-old, readjusting to her life in civilization after years of being in the wilderness. In the second strand, Peggy remembers her experience with James in the forest. This second strand is initially narrated by Peggy, but as Peggy spends more time in the wilderness with her father, she changes and begins referring to herself as "Punzel." For the purposes of this guide, "Peggy" generally refers to the narrator of the first narrative strand, while "Punzel" refers to the narrator of the second narrative strand.

The novel opens with Peggy in her mother Ute's house, reminiscing about her life before James kidnapped her. Peggy remembers her father's friend Oliver Hannington, who stayed with her and James when Ute was away. Peggy remembers Oliver and James fighting one night, and the next day James tells Peggy they are taking a holiday. Peggy goes along with James, and together they travel far away from civilization. Eventually, James and Peggy arrive at a cabin James calls "die Hütte" and begin their new life there.

In their first few weeks at die Hütte, James begins calling Peggy "Punzel." One night after a thunderstorm, James tells Punzel that the storm swept away the rest of the world, and that he and Punzel are the only survivors. Punzel believes him, and promises never to cross the river which separates die Hütte from the blackness where the world used to be. Still, Punzel suspects there is a man named "Reuben" in the forest, for the name "Reuben" is carved into the wall of die Hütte. The novel then switches back to Peggy's present day narration. While Peggy was in the wilderness, Ute had a son and named him Oskar. Oskar and Peggy go walking in a graveyard together, and Oskar tells Peggy that Ute lies to him about her and James' disappearance.

The novel then switches back to Punzel's narration. Punzel describes her and James' time in the wilderness. Their first year, James constructs Punzel a piano which makes no sound and Punzel learns to play. Because he was building a piano, James gathers almost no stores for the upcoming winter, and as a result, he and Punzel almost starve. Toward the end of the winter, James begins exhibiting signs of madness and tries to commit suicide, but Punzel saves him. The two are then saved by spring. Walking through the forest, Punzel spies a pair of boots not belonging to her father, and suspects that she has seen Reuben.

As Punzel becomes a teenager, she begins fighting more with James. One afternoon, James physically hits Punzel and she runs away, resolving never to go back. While in the forest, Punzel meets Reuben. The two quickly become friends, and Reuben kisses Punzel. All the while, James is descending further into madness, and eventually makes Punzel promise that she will commit suicide with him. Punzel tells Reuben about her promise, and Reuben begs her to break it. Punzel doesn't, and together she and James eat poisonous mushrooms. That night, James forces his way into Punzel's bed.

The next morning, Reuben wakes Punzel up and tells her they have to leave die Hütte. Together, the two sneak into the forest and have sex. Afterwards, Punzel tries to gather her things from the cabin in order to escape, but James catches her. James slices off half of Punzel's ear which causes Reuben to kill him with an axe. Punzel then escapes from the forest, but on the way she loses Reuben. Only after walking for days does Punzel find civilization and realize her father lied.

Eventually, Ute finds Punzel and brings her back to her home, marking Punzel's return to Peggy. The narration then switches to Peggy's present moment, where Ute receives a call from the authorities, which reveals that only Peggy's fingerprints were on the axe, implying Reuben was only a figment of Peggy's imagination. Peggy then realizes she is pregnant with James' child. Still, the novel ends with Peggy thinking of "the tips of Reuben's hair" (386).

More summaries and resources for teaching or studying Our Endless Numbered Days.