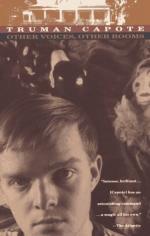 Truman Capote
This Study Guide consists of approximately 41 pages of chapter summaries, quotes, character analysis, themes, and more - everything you need to sharpen your knowledge of Other Voices, Other Rooms.

Other Voices, Other Rooms Summary & Study Guide includes comprehensive information and analysis to help you understand the book. This study guide contains the following sections:

This detailed literature summary also contains Related Titles and a Free Quiz on Other Voices, Other Rooms by Truman Capote.

Other Voices, Other Rooms is the story of Joel Knox, a young boy who finds out about the different forms that love can take. Joel has been raised by his aunt Ellen in New Orleans after the death of Joel's mother. But Joel's life changes when he receives a mysterious letter inviting him to come live with his long-forgotten father at a place called Skully's Landing. What Joel finds at the deteriorating mansion at the Landing both surprises and repulses him, yet Joel remains and finds his place among the eccentric characters who become his new family.

Joel comes to Skully's Landing after receiving a letter written with purposeful intention not by his father, Edward, but by Randolph, the cousin of Joel's father's new wife, Amy. Randolph had enlisted Amy's nursing help after Randolph accidentally shoots Edward, paralyzing him for life. Amy marries Edward and the new couple, along with Randolph, move back to Amy's family's home, Skully's Landing, in remote Louisiana.

Joel's arrival at the Landing opens up a world of eccentric characters and behaviors as Joel attempts to adapt to his new surroundings. Most puzzling to Joel is the reluctance of Amy and Randolph to introduce Joel to his father. This obscurity conjures up fantastic dreams in Joel who has a very active imagination and dream life complete with characters with their own special skills and abilities. When Joel does meet his father he is devastated to learn that his father is an invalid, incapable of communicating or bonding with Joel, so Joel is forced to look for love among the other people in his narrow world.

Joel finds a surrogate mother figure in the black cook at the Landing named Missouri, whose attempts to care for Joel most closely mimic those of his mother and Aunt Ellen. Joel learns that Amy had only wanted Joel to live at the Landing so that Joel could provide some respite for her in the unending care of Edward. Joel's refusal to care for Edward in the way Amy would like, in addition to Joel's budding relationship with Randolph, almost completely severs any hope of a relationship between Amy and Joel.

Joel finds friends in the Thompkins twins, Idabel and Florabel, but Joel finds himself more interested in the tomboy, Idabel, who spurns even the small romantic gestures offered by Joel. As the story progresses, both Idabel and Joel struggle with their emerging sexual identities and preferences and ultimately discover they are attracted to others of the same sex.

By the end of the story, Randolph has managed to create a world in which Joel is completely dependent upon him and uses this bond to manipulate Joel to enter into a budding romantic relationship. Joel feels a new sense of maturity now though, and feels empowered by his experiences and the unusual love he has found in the eccentric household at Skully's Landing.

More summaries and resources for teaching or studying Other Voices, Other Rooms.

Other Voices, Other Rooms from BookRags. (c)2022 BookRags, Inc. All rights reserved.