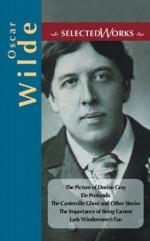 Richard Ellmann
This Study Guide consists of approximately 39 pages of chapter summaries, quotes, character analysis, themes, and more - everything you need to sharpen your knowledge of Oscar Wilde.

This detailed literature summary also contains Topics for Discussion and a Free Quiz on Oscar Wilde by Richard Ellmann.

Richard Ellmann tells the story of Oscar Wilde, and uses extensive notes to document his findings. Ellmann pieces together the man, the genius, the artist, the aesthetic, and the infamy that the world of the 19th century comes to know as Oscar Wilde.

Wilde (October 16, 1854--November 30, 1900) grows up in Ireland and displays a knack, even a genius, for learning. He is not very athletic, and he leads his life by his own rules. He graduates from Oxford, but not without clashing with the authorities about time limitations and examinations. Genius cannot be concerned with these petty matters, or so Wilde seems to think, but the University authorities have different ideas about his philosophy. Eventually, Oscar leaves college with two things: a degree and a case of syphilis.

Oscar enters the working world ready to make his way. As many new college graduates discover, this is not very easy. He struggles to find paying work, and whether by the Fates or by a lack of options, Wilde decides to become a playwright. To accomplish his goal, he must first become famous. Lady Wilde lends a hand in this matter after she moves to London, and taking a lecture first developed there, Oscar tours America and earns a small measure of success. Through persistence, luck, and the development of his playwriting abilities, some of Oscar's creations go into production.

He marries and starts a family, partly to bring in money and partly to establish the respectability he shunned during his college years as the anti-authority type. After fathering two boys, Wilde discovers that he is homosexual. As his career gains momentum, he follows his sexual orientation in ways that he thinks are discrete enough, but eyes and ears cause tongues to wag about town. What society does not know for sure is fleshed out in gossip, and as is often the case, Constance Wilde, Oscar's wife, is one of the last to know.

A destructive love affair enters Oscar's life with Lord Alfred Douglas, spoiled young son of the Marquis of Queensberry, a man who becomes enraged with the relationship. Douglas costs Oscar his career, his money, his family, and two years of his life in prison. After prison, Wilde writes a successfully published poem, The Ballad of Reading Gaol, his last significant work of art before his death. He dies of the tertiary complications that accompany syphilis, a broken and humiliated man, yet respected and honored both in life and death.

More summaries and resources for teaching or studying Oscar Wilde.